LOS ANGELES – The City of Los Angeles will host the 2028 Summer Olympics after working out an agreement that will send the 2024 Summer Games to Paris.  An official announcement is expected to come from the International Olympic Committee, the Los Angeles Times reported.  Earlier this month, the IOC approved an atypical plan to award the 2024 and 2028 Olympic Games simultaneously, with the only question being the order between Paris and Los Angeles.
Paris officials have been adamant about not waiting an extra four years, according to the newspaper, while Los Angeles officials were more amenable to hosting in 2028. 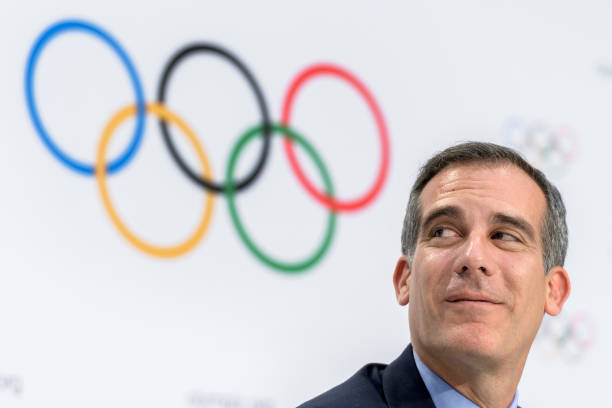 Los Angeles 2024 Olympic bid’s Chairman Casey Wasserman looks on beneath the Olympic Rings a press conference following an IOC extraordinary session on July 11, 2017 in Lausanne. The International Olympic Committee agreed to award the 2024 and 2028 Games at the same time, effectively guaranteeing that Paris and Los Angeles will be the hosts. (FABRICE COFFRINI/AFP/Getty Images).

It will mark the third time — and first since 1984 — that Los Angeles will host the Summer Games. L.A. also hosted in 1932. It also will be the first time the Summer Games are held on American soil since the 1996 Olympics in Atlanta.

The City of Boston originally had the United States support to host the 2024 Games but the organizing committee for Boston failed to get public support and the USOC transferred their support to Los Angeles.