NORTON – The PGA Tour’s FedEx Cup Playoffs swing into Boston with the 100 best players competing in the Dell Technologies Championship. Here’s a look at 10 to watch:

1. Dustin Johnson, United States — Following a major championship season that was hijacked when he sustained a back injury on the eve of the Masters, Johnson re-established himself as the best golfer in the world when he outplayed Jordan Spieth in the final round of The Northern Trust and captured the playoff opener with a birdie on the first playoff hole. He tightened his hold atop the Official World Golf Rankings and regained the lead in the FedExCup point standings heading into the second round of the playoffs. Johnson tied Justin Thomas for the lead with four victories this season and Rory McIlroy for the most in playoff history, also at four. Johnson is playing at TPC Boston for the eighth time. His best results were ties for fourth in 2009 and 2012, and he also tied for eighth last year, when a 4-over-par 75 in the third round kept him from challenging for the title. 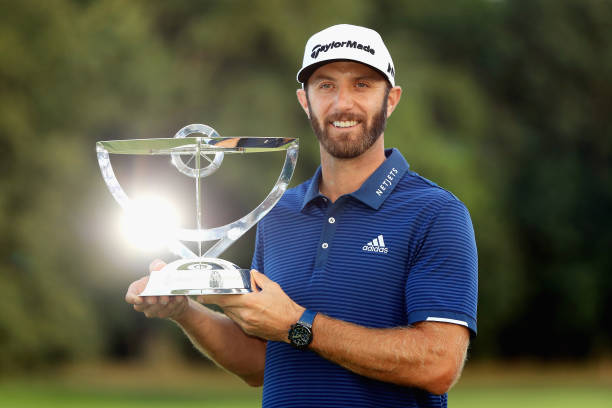 Dustin Johnson with the winner’s trophy after putting for birdie on the 18th green to defeat Jordan Spieth in a playoff to win The Northern Trust at Glen Oaks Club on Long Island, NY. (Photo by Andrew Redington/Getty Images).

2. Jordan Spieth, United States — It was shades of the 2016 Masters as Spieth couldn’t hold a five-stroke lead in the final round and lost to Johnson on the first playoff hole of The Northern Trust to open the playoffs. Still, he is No. 2 in the world rankings and second in the FedExCup standings, behind Johnson in both, with three victories, two seconds and two thirds this season on the PGA Tour. Had Spieth held on, he would have won for the third time in his last five starts and he will try to keep it going this week in the Dell Technologies Championship. The 2015 FedExCup champion is playing at TPC Boston for the fifth time and recorded his best result the first time he saw the place, when he closed with a 9-under-par 62 to tie for fourth, five strokes behind winner Henrik Stenson of Sweden. Surprisingly, he missed the cut two years ago before claiming the Cup a few weeks later by winning the Tour Championship.

3. Rory McIlroy, Northern Ireland — The defending FedExCup champion has captured the second event of the playoff twice at TPC Boston, including last year when he opened with an even-par 71 before reeling off scores of 67-66-65 to win by two strokes over Paul Casey of England. McIlroy was 38th in the point standings before his victory, which put him in position to win the Cup a few weeks later when he captured the Tour Championship at East Lake in Atlanta. He is in a similar position at 43rd in the standings after finishing in a tie for 34th in The Northern Trust to open the playoffs last week. The fourth-ranked McIlroy claimed his first victory at TPC Boston in 2012, posting four scores in the 60s and coming from three shots back in the final round to win by one stroke over Louis Oosthuizen of South Africa. He also tied for fifth in 2014, but he has not been as sharp much of this season after sustaining a rib injury early in the year.

4. Jason Day, Australia — Playing some of his best golf in a season in which he has been slowed by injuries and family issues, Day has tied for ninth in the PGA Championship at Quail Hollow and then tied for sixth in The Northern Trust. Those results doubled his total of top-10 finishes this season on the PGA Tour to four and lifted him to 29th in the FedExCup point standings with three weeks remaining until the finale at East Lake. The ninth-ranked Day is making his 10th start in what is now the Dell Technologies Championship at TPC Boston and his best finish was a tie for second in 2013. He opened with 63-67-66 to take the lead into the final round before closing with an even-par 71 that left him in a tie for second, five shots behind Charley Hoffman, who ran away to win with a 62. Day also tied for third the following year and tied for seventh in 2014, among his seven top-20 results in the second event of the playoffs.

5. Rickie Fowler, United States — After being in the hunt through two rounds of The Northern Trust before shooting a 75, Fowler settled for a 20th-place tie after a closing 70 but remains in the chase at sixth in the FedExCup standings with three weeks left in the playoffs. He has to be looking forward to his return to TPC Boston, where he claimed his only playoff victory in the 2015 Deutsche Bank Championship. Fowler trailed by three strokes before sinking a 40-foot birdie putt on the 14th hole and took advantage of mistakes by Henrik Stenson down the stretch to win by one stroke with a closing 3-under-par 68. He is making his eighth start in the second playoff event, with a tie for 23rd in 2014, the only other time he cracked the top 25. Fowler, ranked 10th in the world, captured the Honda Classic earlier this year for his fourth victory on the PGA Tour and has nine results in the top 10 this season.

6. Justin Thomas, United States — The PGA champion backed up his first major victory with a tie for sixth in the playoff opener, The Northern Trust, last week. Despite a recent streak of three straight missed cuts, he is right in the middle of the FedExCup race with 10 finishes in the top 10 this season, including four victories. Thomas is third behind Johnson and Spieth in the point standings. Thomas, ranked sixth in the world, has broken 70 in seven consecutive rounds heading into the second event of the playoffs, the Dell Technologies Championship. He is playing at TPC Boston for the third time and has yet to get a feel for the course, tying for 56th two years ago before shooting 70-75 — 145 last year to miss the cut by four strokes. Thomas broke 70 for the only time in six rounds in the tournament when he shot 2-under-par 69 in round two last year.

7. Jon Rahm, Spain — With a tie for third in The Northern Trust in his playoff debut, four strokes out of the playoff, Rahm solidified his position in the FedExCup points race. Only a 2-under-par 72 in the third round kept him from possibly being with the leaders at the finish. The 22-year-old Spaniard snapped out of a recent slump with his eighth top-10 finish this season, including his first PGA Tour victory in the Farmers Insurance Open, again displaying a moxie far behind his years. Rahm, No. 5 in the world rankings, moved up one spot in the FedExCup standings to fifth and remains right in the thick of the chase heading toward the Tour Championship in three weeks at East Lake. He will face another new course this week in the second playoff event, the Dell Technologies Championship at TPC Boston, but he has proven to be a quick study throughout his first season on the circuit.

8. Hideki Matsuyama, Japan — Despite a hiccup when he shot 74-69 — 143 to miss the cut by one stroke in The Northern Trust to open the playoffs by missing a short putt on the last hole, Matsuyama still is in position to be a force in the last three events of the FedExCup race. He slipped from first to fourth in the Cup standings, but still controls his own destiny with three events remaining in the playoffs. The third-ranked Matsuyama was coming off a four-event stretch in which he tied for second in the U.S. Open, tied for 14th in the Open Championship, won the WGC-Bridgestone Invitational and tied for fifth in the PGA Championship, so it would be unwise to count him out. Spieth missed the cut in the opener two years ago and went on to win the FedExCup. Matsuyama is making his fourth start at TPC Boston and seemed headed for a top-10 finish before closing with a 4-over 75 two years ago and tied for 25th, then tied for 15th last year.

9. Matt Kuchar, United States — Kuchar has a well-deserved reputation as a top-10 machine and he has done so four times recently. Those results include a solo second behind Spieth in the Open Championship at Royal Birkdale last month and a tie for ninth in the PGA Championship at Quail Hollow before he tied for 10th to open the playoffs in The Northern Trust. That run of success, giving him seven top-10s this season, has lifted Kuchar to a solid position of 15th in the FedExCup point standings and he also is 13th in the world rankings. Kuchar certainly is a contender with three weeks left in the playoffs, but at some point he will need to win for the first time since his seventh PGA Tour victory in the 2014 RBC Heritage. He will tee it up this week at TPC Boston for the 14th time and has six results in the top 25, the best a tie for fourth in 2013, and a tie for ninth in 2007.

10. Paul Casey, England — After finishing in solo fifth at The Northern Trust to open the playoffs, Casey climbed to 12th in the FedExCup point standings with his seventh result in the top 10 on the PGA Tour this season. He finished 26th in the U.S. Open at Erin Hills, but that’s the only time he wound up out of the top 25 in his last 11 tournaments, and he certainly is flying under the radar with three playoff events remaining. Casey has climbed to 14th in the world rankings but will have to claim his first PGA Tour victory since the 2009 Shell Houston Open if he is going to be a bona fide contender in three weeks at the Tour Championship in Atlanta. He is making his fifth start at TPC Boston and last year carried the lead into the final round after posting three consecutive scores of 5-under-par 66, but he closed with a 73 to wind up solo second, two shots behind winner Rory McIlroy

The PGA Tour’s FedExCup Playoffs continue this week with the top 100 point-scorers moving on to the suburbs of Boston: