Bautista, 21, signed with Cleveland in 2018 out of the Dominican Republic. In 2019, he made seven relief appearances in the Dominican Summer League and seven in the Arizona League, giving up 15 earned runs in 17 1/3 innings pitched for a 7.79 ERA. 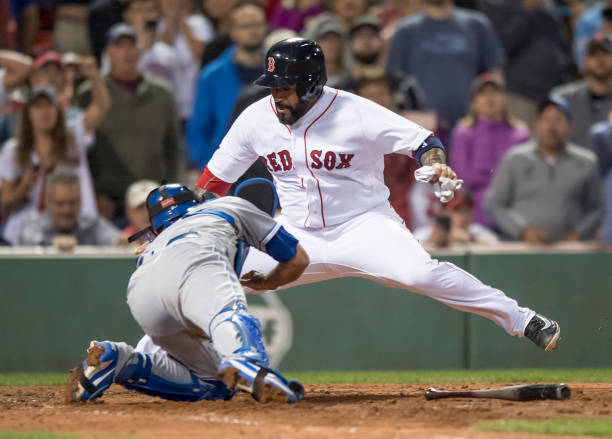 BOSTON, MA – JULY 29: Sandy Leon #3 of the Boston Red Sox avoids the tag of Drew Butera #9 of the Kansas City Royals to score the game winning run in the tenth inning on July 29, 2017 in Boston, Massachusetts. (Photo by Michael Ivins/Boston Red Sox/Getty Images)

BOSTON — Sandy Leon is not the kind of player you think of when you talk about speed.But very late Saturday night, the Boston catcher used his legs and wits to score the winning run in the 10th inning to cap a wild Red Sox 9-8 victory over the surging Kansas City Royals.

“I saw (catcher Sal Butera) reach for the ball, so the right side was wide open so I decided to go for it without him touching me,” Leon said after getting his hand in and around Butera for the winning run, which he scored on Eduardo Nunez’s groundout.

With runners at second and third and one out, Nunez, who had already homered twice and singled in his second game with his new team, hit a grounder into the drawn-in infield. Shortstop Alcides Escobar gloved the ball with a dive and threw Nunez out at first. But Leon, who thought Mookie Betts was going to get trapped off second, took off down the line from third and beat the tag after the throw came in from first baseman Eric Hosmer, who pulled the same thing on the New York Mets in Game 5 of the 2015 World Series.

“That was a great job (by) Leon,” said Nunez, who was rewarded with a face full of baby powder. “He saw the whole play right in front of him.”

Leon entered the game in the ninth inning, replacing Christian Vazquez, who had a single, double, triple and two RBIs but was taken out for a pinch runner in the eighth.

Leon cut down speedy pinch runner Terrance Gore attempting to steal second in the ninth before leading off the 10th with a double off Mike Minor (5-3). A Minor wild pitch helped set up the winning run after Betts was walked intentionally.

“It goes to Sandy’s readiness to make a throw as he did,” said Boston manager John Farrell. “Some may say it’s a risky move to make a change with a catcher late but Sandy came up big on both sides of the ball — the leadoff double, the cut down of Gore and the acrobatic slide to finish it.”

The four-hour, 45-minute win, which allowed the Red Sox to remain a half-game behind the New York Yankees in the American League East, was Boston’s second in the last seven games and raised the Red Sox’s record to 7-9 since the All-Star break.

Sacrifice flies by Jackie Bradley Jr. and Betts in the seventh and eighth innings brought the Red Sox back into a tie — after the Royals scored four in the sixth to take an 8-6 lead.

The loss dropped the Royals three games behind the winning Cleveland Indians, who have won nine straight and come to Boston on Monday, in the AL Central.

“We missed the tag at the plate but (Escobar) made a great play stopping it and wheeling and throwing to first and (Hosmer) got rid of it as quick as he could,” Royals manager Ned Yost said. “It was just a tough play. It was a great slide.”

Nunez is 5-for-9 with a walk in his first two games with the Red Sox — and he didn’t even mind “Baby powder in my eyes. I didn’t even see, after that. That was fun.”

The Royals homered for the 10th straight game and Nunez’s two homers matched the opposition total registered against Kansas City during the nine-game winning streak.

NOTES: LHP David Price, on the disabled list with a recurrence of his left elbow injury (he said the injury isn’t as bad as last time), spoke to the media about Dennis Eckersley for the first time since he lambasted the Hall of Famer and club broadcaster on a team flight. He didn’t back off, saying, “Fans hear what (broadcasters) say, they’re going to believe what they read and what they hear on TV, that’s not us. If Eck was around, he’d know who we are. He’s never in the clubhouse.” He said he will “talk it out” with Eckersley, who is in Cooperstown this weekend. Price did admit “I could have handled it a different way.” … RHP Al Alburquerque, who had been designated for assignment by the Royals, was placed on unconditional release waivers. … Boston shipped DFAd LHP Luis Ysla to the Dodgers for cash considerations. … Red Sox 2B Dustin Pedroia rested a sore knee. … RHP Jason Hammel, winless in his last six starts since beating Boston on June 19, faces LH Drew Pomeranz on Sunday, when the Red Sox honor their 2007 champions.

BOSTON – (Staff) – Boston Red Sox catcher Sandy Leon was hoping to redeem himself when he stepped up to the plate in the bottom of the 12th inning. Earlier in the scoreless game, Leon was cut down at the plate after running through 3B coach Brian Butterfield’s “stop sign,” with what might have been the winning run in the third inning. With CF Jackie Bradley Jr. and 3B Pablo Sandoval both on board after earning a pair of base on balls, Leon crushed an Antonio Bastardo pitch, left hanging over the plate, and plopped it into the left-centerfield Green Monster seats at Fenway Park to give the Red Sox a 3-0 victory over the Pittsburgh Pirates in the second game of the young season.

On a cold New England night, without the ball traveling in the 40-degree still, damp air, Leon could’ve scored that one run in the third inning and it might’ve been enough. The catcher was part of a battery which held the Pirates to only five hits. Starter Chris Sale, pitching in his very first game at Fenway Park as a member of the home team threw seven innings of three-hit baseball, striking out seven Pittsburgh batters while walking only one. Sale turned it over to the bullpen and Matt Barnes, Craig Kimbrel, Heath Hembree and Robby Scott all held the Pirates scoreless before the game’s winning pitcher, Joe Kelly, came in for two impressive innings, extending his personal winning streak to 13 straight decisions, dating back to August 1, 2015. In team history, the only longer streak belongs to Roger Clemens who won 14-straight from April 11-to-June 27, 1986.

After the Red Sox victory, manager John Farrell was thrilled with his team’s endurance, anchored by Sale.

“An outstanding outing by Chris Sale,” said Farrell. “It was a classic pitcher’s duel and I love how he goes about his work. He was sharp, his velocity and his breaking ball were effective on a cold night when the ball wasn’t traveling.

Sale was making his Red Sox debut and continued his ways of not losing a season debut in any of his six major league seasons as a starter, going 5-0 with a 1.73 ERA (8 ER/41.2 IP). The outing marked Sale’s 20th career start pitching 7.0 or more scoreless innings.

The Pirates did not record more than five hits for their second straight game, falling victim to Red Sox reigning Cy Young Award winner Rick Porcello and a stellar relief effort on Monday. The poor offensive output tied the club record for low output, dating back to 1913.

The Red Sox have allowed Pittsburgh runs in only one of 21 innings played this season, holding the Bucs scoreless in the first six innings of both games played to open the season.

On the offensive side, Leon led the Sox, going 3-for-5 with a 2B to add to his game-winning homer and three RBI. He fell a triple shy of batting for the cycle. Sox second baseman Dustin Pedroia, playing in his 1,400 career game in a Red Sox uniform singled for the second consecutive game and is now in sole possession of 11th place on the all-time Red Sox games-played list, surpassing Dom DiMaggio tonight.

NOTES: The Red Sox and Pirates wrap-up their three-game season-opening series on Thursday with a 1:35pm afternoon start at Fenway park. LHP Eduardo Rodriguez is scheduled to start for Boston while RHP Chad Kuhl goes for the Bucs … Red Sox manager John Farrell is now six wins shy of 500 for his career … Sox All-Star Rookie Betts was sent home from the game after coming down with flu-like symptoms that have also plagued utility man Brock Holt and pitcher Robbie Ross. All three players were unable to play tonight, leaving the Red Sox short-handed at a number of positions.