LAST WEEK: The Open Championship (Francesco Molinari); The Barbasol Championship (Troy Merritt)
THIS WEEK: RBC Canadian Open, July 26-29
Glen Abbey Golf Club, Oakville, Ontario (Par 72, 7,253 yards)
Purse: $6.2 million (Winner: $1.116 million)
Defending Champion: Jhonattan Vegas
Television: Thursday-Friday 3-6 p.m. ET (Golf Channel); Saturday-Sunday, 3-6 p.m. (CBS)
Vegas is trying to become the first three-peat champion at a PGA Tour event since Steve Stricker at the John Deere Classic from 2009-11. … The event will move next year to June 6-9, the week before the U.S. Open. … Pat Fletcher (1954) was the last Canadian to win the country’s national championship. Adam Hadwin (No. 55) is the top-ranked Canadian in the field this week. He missed the cut last year as Mackenzie Hughes was the top-ranked Canadian with his tie for 32nd. … No. 1 Dustin Johnson, No. 4 Brooks Koepka and No. 11 Tommy Fleetwood lead the list of 12 players ranked inside the top 50 who are in the field. Johnson, who is endorsed by RBC, also leads the FedExCup standings. … There are four weeks until the FedExCup playoffs, which begin with the top 125 players in the standings. Sergio Garcia, who is at No. 132, has entered the Canadian Open for the first time since 2001 after missing the cut at The Open Championship last week. … The Canadian Open was Arnold Palmer’s first PGA Tour victory in 1955. … Jack Nicklaus designed Glen Abbey and was a seven-time runner-up in the event, which he never won.
NEXT WEEK: WGC-Bridgestone Invitational, Akron, Ohio; Barracuda Championship, Montreux G&CC, Reno, Nev. 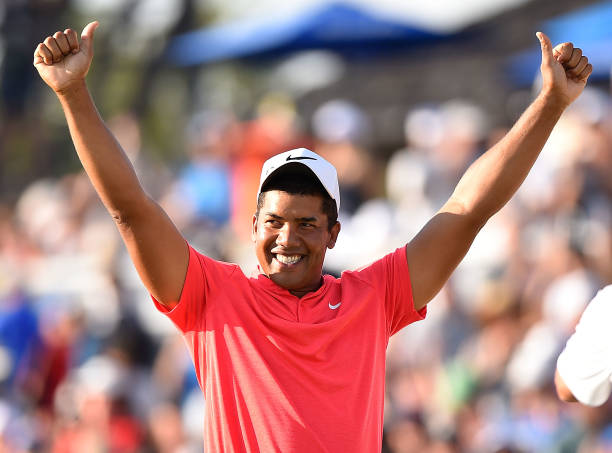 Jhonattan Vegas of Venezuela reacts to his winning putt during a sudden death playoff during the final round of the RBC Canadian Open at Glen Abbey Golf Club on July 30, 2017 in Oakville, Canada. (Minas Panagiotakis/Getty Images).

On the playoff hole, which was the par-5 18th at Glen Abbey Golf Club, Vegas, a 32-year-old Venezuelan, hit a chip from off the green to within a foot of the hole. He made his birdie putt, then claimed the title when Hoffman’s birdie attempt from a bunker went past the hole.

Vegas shot a 7-under 65 in the final round to finish at 21-under 267. Hoffman, who entered the final round with the lead, fired a 4-under 68, making a birdie on the 18th hole to force the playoff.

“I knew that I had to shoot a good round today to have a chance to win again,” Vegas said. “I just came out with an aggressive mentality, just feeling really good about my game. When I started making a few birdies, especially the putt for birdie on 7, I started feeling the same chills that I felt last year when I won.”

The victory was the third of his career, but it represented a major turnaround this year for Vegas, who missed the cut in his previous five tournaments.

“To repeat in Canada, it doesn’t get any better,” Vegas said. “I came in here on a really long stretch of five missed cuts, not playing great golf, did a little bit of change on my Mizuno irons this week, and it was magic, to be honest.”

Hoffman missed a 15-foot eagle putt on the par-5 16th hole, then missed a 10-foot birdie attempt on the 17th. On the 18th, he barely missed an eagle putt of about 25 feet that would have won the tournament, but it went by the left lip of the cup. He made that birdie to force the playoff.

“I gave myself a chance, except I putted horribly today and left everything short,” Hoffman said. “Jhonny played great today. All credit to him. It’s always tough after you don’t close the deal after having the lead.”

Ian Poulter of England finished one stroke behind the leaders after firing a final-round 8-under-par 64, the best round of the day.

British Open runner-up Matt Kuchar, who barely made the cut after experiencing dizziness in the first round, finished at 278 in a tie for 32nd place

Ten players to watch at this week’s RBC Canadian Open:

COMING UP
PGA TOUR: RBC Canadian Open at Glen Abbey Golf Club in Oakville, Ontario, Thursday through Sunday.
TV: Thursday and Friday, 3-6 p.m. EDT on the Golf Channel; Saturday and Sunday, 1-2:30 p.m. EDT on the Golf Channel and 3-6 p.m. EDT on CBS.
LAST YEAR: Jhonattan Vegas of Venezuela birdied the last three holes at Glen Abbey to claim his second PGA Tour victory by one stroke over Dustin Johnson, Jon Rahm of Spain and Martin Laird of Scotland. Vegas sank a 7-foot putt on the 16th hole, a 9-footer on the 17th and a tap-in on the final hole. He began the day five strokes out of the lead held by Brandt Snedeker. Vegas got into the thick of things early with birdies on his first five holes en route to an 8-under-par 64 that gave him his first victory since the 2011 Bob Hope Classic. Johnson eagled the 16th and birdied the 18th for a 69, while Rahm, in his fourth pro start, and Laird both shot 67. Snedeker, who won the 2013 Canadian Open, shot 71 to finish two shots back in a tie for fifth.