JERSEY CITY – With the PGA Tour concluded last weekend with the Tour Championship and the crowning of Justin Thomas was the FedEx Cup Playoff winner, the tour pros turn their attention to the 12th Presidents’ Cup tournament to be held this weekend in New Jersey.

2015: Bill Haas, who made the United States team as a captain’s pick by his father, captain Jay Haas, beat Sang Moon Bae of South Korea, 2 up, in the final singles match to give the Americans a 15 1/2 to 14 1/2 victory at Jack Nicklaus Golf Club in Incheon, South Korea. The U.S. claimed its sixth consecutive victory over the International team after the singles matches were split, 6-6. The Americans lead the series 9-1-1. Phil Mickelson, who has played in all 11 Presidents Cups, posted a 3-0-1 mark, including a 5-and-4 victory over Charl Schwartzel of South Africa in singles, and Zach Johnson also went 3-0-1, including a 3-and-2 singles victory over Jason Day of Australia. South Africans Branden Grace and Louis Oosthuizen combined for a 9-0-1 mark for the Internationls, with Oosthuizen halving his singles match with Patrick Reed.

JERSEY CITY – Phil Mickelson and Charley Hoffman were named as the two at-large captain’s picks for the United States squad that will compete in the Presidents Cup. The Presidents Cup, which pits a team from the United State against an International squad, will be played Sept. 26-Oct. 4 at Liberty National Golf Club in Jersey City, N.J. 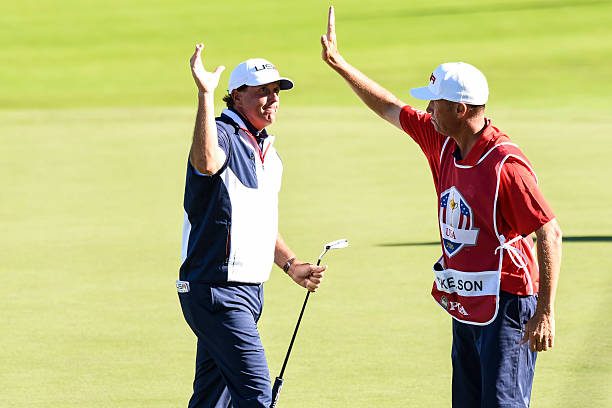 Mickelson is 15th in the U.S. Presidents Cup standings and the top 10 automatically qualify. Mickelson finished in a tie for sixth at the Dell Technologies last week, which is why Stricker selected him over Brian Harman, Jason Dufner and Gary Woodland, who placed 12th, 13th and 14th in the U.S. standings.

“It means a lot to me this year because the players and the captains wanted me on the team even though I didn’t get the spot on my own,” Mickelson, 47, said, according to USA Today. “I really love being around these guys. I respect and know how great these guys are. And this team is a special team.”

“Phil brings a wealth of experience to the team,” Stricker said. “He struggled a little bit at the end of the year but he showed his desire and effort to make the team and he had a great showing in the Dell Technologies Championship. From reports from the players, that was the Phil of old.”

Stricker called the selection of Hoffman, who is 11th in the standings, was a “no-brainer,” since Hoffman has won four PGA Tour titles this year to go along with seven top-10 finishes.

Internationals captain Nick Price selected Emiliano Grillo and Anirban Lahiri, who is 16th in the International Presidents Cup standings, as his at-large picks.

Grillo had a final-round 66 in the Dell Technologies Championship to move into the 11th spot in the standings.

BOSTON – If and when Texas secedes from the Union, you can be damn sure Jordan Spieth wouldn’t be playing for the United States of America in the Ryder Cup. The PGA of America (sans Texas) would draw a line as straight as a two-foot putt at Hazeltine limiting the roster to true blue.

That isn’t the case this week, as the 41st Ryder Cup tournament tees-off in Chaska, Minnesota and the team of the European Union casts its line-up, complete with seven of the dirty dozen Europeans hailing from the United Kingdom, not to mention its Northern Ireland bred coach, Darren Clarke who is downplaying the potential controversy as political rhetoric and economic policy rather than a simple geography lesson.

“We’re still one continent,” said Clarke, back in June when his compatriots voted their way out of the European Union in a move tabbed as “Brexit.” “It makes no difference to us whatsoever because the UK is always going to be a part of the European continent. So. we’re (going there) as Europe. We’ll still use the European flag because that’s our continental flag.”

Perfectly acceptable logic for the team captain, looking to lay-up some talking points, rather than aggressively taking a run at the pin.

Clarke, by his own logic, opens the door for North American golfers from Canada or Mexico to claim a coveted spot on the non-European side and thus calls into question the concept of the historic Ryder Cup, a biennial juggernaut of an event, sometimes called golf’s super bowl. Clearly, the current Ryder Cup brand and its match play format remains a concept the PGA of America and golf’s Royal and Ancient hierarchy wants and needs to protect at all costs.

The question arises: Should the Ryder Cup be expanded to a continental competition? It could be a tournament expanded and open to a more globally inclusive roster of continental compadres to include South American, Australian, Asian and African duffers, albeit the latter would be mostly represented by South Africans who dominate the sport on their continent. Or should the Ryder Cup remain in its current format as a rivalry between the USA and (geographic) Europe?

If the latter is the case, maybe the door should be open for the biennial President’s Cup to become an Olympic-style qualifier, either for national teams or for the aforementioned continental divide? A round-robin between North America-South America-Europe-Asia-Africa and Australia surely would peak interest in the after-thought that is the current President’s Cup format.