CHARLOTTE – (Special for Digital Sports Desk by The Sports Xchange) – Kevin Kisner likes to have a good time when he plays in a major championship and there’s really only one way to accomplish that.  Play the way he did the first two rounds of the PGA Championship.

“They are not a whole lot of fun unless everything is working out for you,” Kisner said of majors. “We’ve seen a lot of low scores in majors. There’s been a lot of birdies. You’ve got to realize that guys are making birdies, and the whole mind-set of pars are good is kind of out the window.” 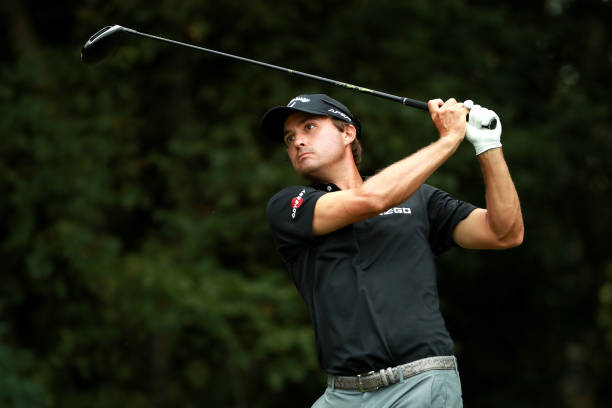 Kevin Kisner of the United States plays his shot from the 12th tee during the second round of the 2017 PGA Championship at Quail Hollow Club on August 11, 2017 in Charlotte, North Carolina. (Photo by Scott Halleran/PGA of America via Getty Images).

Kisner matched his first-round score with another 4-under-par 67 on Friday at Quail Hollow Club. He shares the tournament lead at 8-under 134 with Japan’s Hideki Matsuyama, who shot a 64 on Friday.

They hold a two-shot edge on the rest of the field, though several players will have to complete rounds Saturday morning because play was suspended by darkness.
Matsuyama, who played during the rain-interrupted afternoon round, used a late-day surge to pull even.

Australian Jason Day is in third place at 6-under.

Kisner said he’s intent on staying aggressive. He continued what had been a stretch late in Thursday’s round by posting birdies on two of the first three holes in the second round, which he began on the backside. Then on No. 7, he posted an eagle for the only hole he didn’t post a par on that side.

“You have to be able to attack when you can, is my big deal in majors and you’ve got to be comfortable putting 3- and 4- and 5-footers for par on the holes that you can attack,” he said. “I think that’s a big deal in major championships.”

Kisner, who’s from Aiken, S.C., said his parents grew up in Charlotte and his grandmother still lives here. He has spent many holidays in the city and would like something else to celebrate by Sunday.

Matsuyama made a big jump in the afternoon. He tied Kisner with birdie on the 17th hole and then barely missed a birdie putt for the lead on the final hole. Earlier, Matsuyama strung together four consecutive birdies, with the last one coming on No. 15 after play resumed.

Day, the 2016 runner-up, had an eagle on No. 7 followed by two birdies and finishing just before it became too dark to play.

Jordan Spieth, in his first quest to complete a career grand slam, is at 3-over for the tournament.

Rickie Fowler stayed in contention with a 70, moving to 3-under for the tournament.

“You want to get off to a good start and be in a good position which he has done and I have done as well,” Fowler said. “We’ll go battle it out this weekend.”
Fowler said he felt good about his positioning, particularly with toughening conditions.

“If you look at the majors, this is probably the hardest test we’ve had this year,” he said. “That’s saying something.”
D.A. Points appeared to be Kisner’s biggest morning threat until double-bogeys on Nos. 16 and 17 pushed him to 1-under for the tournament. Points ended up with 73 in the round, taking it in stride.

“It’s nice to be in the hunt a little bit,” Points said. “See your name up on the board. Have the feel on the cameras on you. Haven’t had it for a few months, so it’s good to have that feeling again.”

Play was halted at 4:43 p.m. because of dangerous weather looming. The suspension lasted 1 hour, 43 minutes.

First-round co-leader Thorbjorn Olesen of Denmark was 6-over through 15 holes of the second round, falling all the way to a 31st-place tie.

Phil Mickelson, who followed Thursday’s 79 with a 74, will miss the cut in the PGA Championship for the first time in 22 years. Mickelson didn’t have a birdie until his 31st hole of the tournament. The 79 was his worst round in a PGA Championship.

“Here there is some severe rough,” Mickelson said. “Coupled with the fact that I hit the ball above the hole most of the time, that wasn’t a good combination.”

NOTES: Steve Stricker will make the cut in a major for the 26th consecutive time, going to the weekend at 3-over following his second-round 70. … Defending champion Jimmy Walker had 69 after a first-round 81, missing the cut at 8-over. … Though Omar Uresti is a former PGA Tour player, he never qualified for this tournament until making it as a club pro this year. He advanced to the weekend at 2-over through two rounds. … Si Woo Kim withdrew from the tournament citing a back injury. He shot 79 in the first round

(Special to Digital Sports Desk by The Sports Xchange) – Jordan Spieth celebrated his 24th birthday during his week off after winning the 146th Open Championship at Royal Birkdale.  Spieth can give himself the best present of all this week by becoming the sixth player to complete the modern career Grand Slam with a win in the PGA Championship at Quail Hollow Club in Charlotte, N.C. 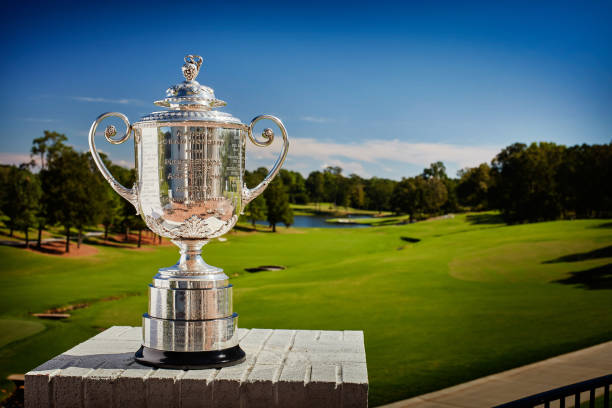 A view from the Wanamaker Trophy at Quail Hollow Club on September 30, 2016 in Charlotte, North Carolina. (Photo by Gary Kellner/PGA of America via Getty Images) *** Local Caption ***

He would become the youngest to complete the career Slam and the first to finish it off in the PGA, but he is trying not to focus on that.

“I’m looking it like it’s just another major and there are only four of them every year that we try to peak for, and that’s enough to make it important,” said Spieth, who claimed his first two major titles, the Masters and U.S. Open, back-to-back in 2015.

“I’m healthy and playing well, so I feel like I have a chance. If I (complete the career Slam) this year, fantastic, but if I don’t, I might have 30 more chances to do it. I believe I will do it at some point, and it would be nice to happen now.”

“To be in that company, no doubt, is absolutely incredible,” Spieth told reporters Sunday about his excitement at the opportunity. “What those guys have done has transcended the sport. And in no way, shape or form do I think I’m anywhere near that, whatsoever. So it’s a good start, but there is a long way to go.”

Winning all four majors is so difficult that the likes of Arnold Palmer, Walter Hagen, Byron Nelson, Sam Snead, Tom Watson, Lee Trevino, Tommy Armour of Scotland and Raymond Floyd were not able to claim the elusive final leg of the Slam.

Interestingly, three players will have a chance to finish it off in the next three majors: Spieth this week, Rory McIlroy of Northern Ireland in the Masters next April and Phil Mickelson in the U.S. Open next June.

McIlroy has claimed four major titles, including the PGA twice, but hasn’t won a Grand Slam event since the 2014 PGA at Valhalla. He is 0-for-3 while trying to wrap up the career Slam by winning the Masters.

“I think Jordan has a great chance to do it this week, and it would be huge for golf,” said McIlroy, who has tied for ninth, tied for third and tied for seventh in the past three Masters. “Tiger did it at 24, too, and that’s historic in itself.

“If Jordan is able to do it, it would be great for the sport as I said, and I texted him after he won the Open and told him that.”

Mickelson has claimed 48 titles in his pro career and is a five-time major winner, but he is winless everywhere since he claimed a third leg of the Grand Slam by winning the Open Championship in 2014 at Muirfield. That was the one everyone felt would be the most difficult for him to win.

Lefty has finished second eight times in the U.S. Open, the only major he has failed to win, but hasn’t come close in his three attempts to complete the career Slam, tying for 28th, tying for 64th and missing the cut.

This year, he skipped the tournament at Erin Hills because his daughter Amanda’s high school graduation game on the same day as the first round. At the age of 47, his clock definitely is ticking.

“You look at Jack Nicklaus, he went through a stretch where he didn’t win a major in three years,” McIlroy said after tying for fourth at Royal Birkdale. “I’m not comparing myself to Jack. It’s hard to win them. It’s very hard. It’s the reason especially in this generation, excluding Tiger, no one’s got above five. So it’s tough to win them.

“I feel like three years (without winning a major) has been too long. But at the same time I’m not going to rush it, I’m not going to be impatient. I’m going to play my game. And hopefully my chance arrives at some point and I’m able to take it.”

McIlroy won four majors by the time he was 25 and probably felt a bit like Spieth does now, but the subsequent three years have taught him otherwise.

After winning his first two majors in 2015, Spieth tied for fourth in the Open Championship and finished second in the PGA to complete a brilliant season in the Grand Slam events.

It would be nice if he could win the PGA this week, before he learns that it’s not all that easy, even for the great ones