VANCOUVER – Center Jack Hughes was the No. 1 overall pick in the NHL Draft on Friday night — and just the start of a record-setting evening for the United States National Development Team.

Led by Hughes, an 18-year-old who was selected by the New Jersey Devils, the USNDT had eight players picked in the first round — the most first-rounders ever selected from one team. Four of the picks were in the top 12, which made the USNDT the first team to yield four picks in the top 12 since 1972, when the Toronto Marlboros had four picks among the top 11.

After Hughes, center Alex Turcotte was chosen fifth by the Los Angeles Kings, and forward Trevor Zegras went ninth to the Anaheim Ducks.

The USNDT had four players in a row selected beginning with left winger Matthew Boldy (12th to the Minnesota Wild), who was followed by goalie Spencer Knight (13th to the Florida Panthers), defenseman Cam York (14th to the Philadelphia Flyers) and right winger Cole Caufield (15th to the Montreal Canadiens), the latter of whom was viewed by many as the steal of the draft.

The record-setting night for the USNDT ended with center John Beecher going 30th to the Boston Bruins. The first round concluded with a ninth American pick when the Buffalo Sabres selected defenseman Ryan Johnson, who played for Sioux Falls of the United States Hockey League, with the 31st pick.

The draft began with the writing of the first words in the latest chapter in one of the NHL’s biggest regional rivalries. After the Devils picked Hughes, the New York Rangers followed by selecting Finnish left winger Kaapo Kakko with the second overall pick.

Hughes, who was born in Orlando, Fla., and is 5-foot-10, 170 pounds, captained the U.S. national under-18 team during the 2018-19 season and collected 112 points in 50 games. He cemented his status as the top prospect in the draft during the International Ice Hockey Federation World Under 18 Championships in April, when Hughes led all players with 20 points.

“I’m so fired up, man, I’m so pumped up to be a Devil now,” Hughes told NBC Sports Network. “Great people, great organization. I’m just so happy to be a part of the Devils organization.”

The Rangers wasted no time selecting Kakko, who broke Florida Panthers center Aleksander Barkov’s record by scoring 22 goals during his under-18 tenure in the Finnish Elite League.

“It’s a game-changer, there’s no question about it,” Rangers president John Davidson told NBC Sports Network. “Tremendous talent, a really good kid, really grounded, calm about everything. I can hardly wait to see the fans in Madison Square Garden watch this kid just grow right before their eyes.”

CHICAGO — The New Jersey Devils selected center Nico Hischier with the first pick of the 2017 NHL draft on Friday night.

Hischier, an 18-year-old from Switzerland, racked up 86 points (38 goals, 48 assists) in 57 games last season with the Halifax Mooseheads of the Quebec Major Junior Hockey League. He was named the league’s rookie of the year. 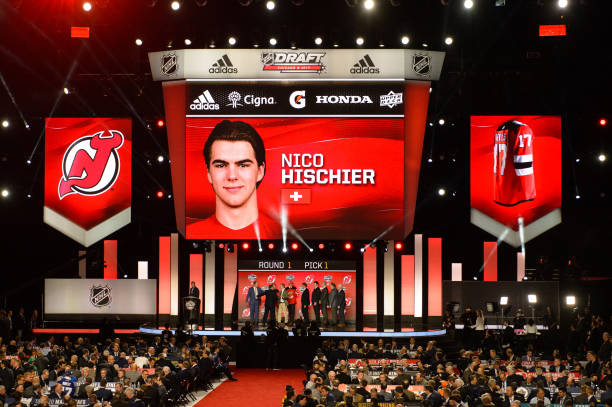 CHICAGO, IL – JUNE 23: The New Jersey Devils select center Nico Hischier with the 1st pick in the first round of the 2017 NHL Draft on June 23, 2017, at the United Center in Chicago, IL. (Photo by Daniel Bartel/Icon Sportswire via Getty Images)

The selection marked the Devils’ first No. 1 overall draft pick in franchise history. New Jersey general manager Ray Shero and his front-office staff opted for Hischier over Nolan Patrick, another playmaking 18-year-old center who was considered for the top pick.

The Philadelphia Flyers happily grabbed Patrick with the next selection. The 6-foot-2, 199-pound Winnipeg native had 46 points (20 goals, 26 goals) in 33 games last season with the Brandon Wheat Kings of the Western Hockey League.

Miro Heiskanen of Finland was the first defenseman off the board when the Dallas Stars selected him at No. 3.

The Vegas Golden Knights used their first draft pick at No. 6 overall to select Cody Glass, an 18-year-old from the Portland Winterhawks of the WHL. Glass tallied 94 points in 69 games last season.

The Detroit Red Wings added one of the largest players in the draft by taking 6-foot-6, 221-pound center Michael Rasmussen at No. 9. The Florida Panthers picked right winger Owen Tippett from the Ontario Hockey League to finish the top 10.

Highly touted Canadian center Gabriel Vilardi surprisingly slipped out of the top 10. However, he did not have to wait much longer for his name to be called as the Los Angeles Kings took him at No. 11.

The Golden Knights had two more first-round picks thanks to previous deals with the Winnipeg Jets and New York Islanders. Vegas added center Nick Suzuki at No. 13 and defenseman Erik Brannstrom at No. 15.

One year ago, the Toronto Maple Leafs used the top overall pick to select Auston Matthews, who went on to score 40 goals as a rookie. The Maple Leafs added another promising young player on Friday with the selection of Swedish defenseman Timothy Liljegren at No. 17.

The smallest player to be drafted in the first round was right winger Kailer Yamamoto (5-8, 153 pounds), who went to the Edmonton Oilers with the 22nd selection. Yamamoto racked up 99 points (42 goals, 57 assists) in 65 games last season with Spokane of the WHL.

After a busy day of deals across the league, the trade market cooled considerably during the draft. Nearly 2 1/2 hours passed before the Blackhawks and Stars struck the first draft deal. Chicago sent its No. 26 pick to the Stars for picks No. 29 and 70.

The Stars used the 26th pick to select Boston University goaltender Jake Oettinger. The 6-4, 218-pound netminder posted a 2.11 goals-against average and a .927 save percentage last season for the Terriers.

The Blackhawks stirred the crowd by having Jonathan Toews and Patrick Kane announce their pick at No. 29. Chicago took 18-year-old defenseman Henri Jokiharju from Portland of the WHL.

In another late-round trade, the Blues acquired 25-year-old center Brayden Schenn from the Philadelphia Flyers for veteran center Jori Lehtera, the No. 27 pick and a conditional first-round pick in 2018. The Flyers used the 27th selection to take Morgan Frost, a center from Sault Ste. Marie of the OHL.

The Blues pulled off their second trade of the night when they sent forward Ryan Reaves and the No. 51 pick of the second round to the Pittsburgh Penguins for center Oskar Sundqvist and the No. 31 pick. With the final pick of the first round, the Blues chose forward Klim Kostin out of Russia.