LAS VEGAS – LeBron James is preparing to take on a new role with the Los Angeles Lakers this season as point guard, according to a report Monday by Yahoo! Sports’ Chris Haynes.

The 34-year-old James will take over floor general duties from Lonzo Ball, who was traded to New Orleans, and Rajon Rondo, who remains one of three other point guards on the Lakers’ roster along with Quinn Cook and Alex Caruso.

While James has started sparingly as a point guard in his career, the job falls within his comfort zone since the 15-time All-Star and four-time NBA MVP has functioned primarily as a point forward for most of his career.

James is starting his 17th season in the league and will be surrounded by several new faces looking to contend for a championship thanks to the addition of All-Star forward Anthony Davis and six-time All-Star center DeMarcus Cousins.

–Russell Westbrook’s 11-year run in Oklahoma City could be coming to a close as the Thunder shift into rebuilding mode.

The latest move from Thunder general manager Sam Presti came as forward Jerami Grant was traded to the Denver Nuggets for a 2020 first-round pick. Moving Grant saves the Thunder $39 million, according to ESPN.

Bradley joins a rebuilt roster around LeBron James that features a multitude of newcomers including Anthony Davis, DeMarcus Cousins and Danny Green.

Bradley, 28, was a target of the Lakers in trade talks in 2017 and 2018. He split time last season between the Los Angeles Clippers and Memphis Grizzlies, averaging 16.1 points and 4.0 assists in Memphis.

—Jabari Parker agreed to a two-year, $13 million deal with the Atlanta Hawks.

Parker, 24, was the No. 2 overall pick in the 2014 draft but will be starting over with his fourth team.

Injuries have limited Parker to 247 career games — he suffered torn anterior cruciate ligaments in 2014 and 2017 — but he holds averages of 15.1 points and 5.7 rebounds per game in the NBA.

Rubio, who will pair in the backcourt with shooting guard Devin Booker, averaged 12.7 points, 6.1 assists and 3.6 rebounds last season, his second with the Utah Jazz. He helped Utah to consecutive playoff appearances, averaging 14.6 points, 7.7 assists, 5.5 rebounds and 1.8 steals in the playoffs the past two seasons.

Green reportedly turned down more lucrative offers elsewhere to return to the Clippers and try to win a championship.

The Hawks received center Damian Jones and a 2026 second-round draft pick from the Warriors in exchange for Spellman.

The deal is for two seasons, according to The Athletic.

McCaw played in 29 games this past season for the Cleveland Cavaliers and Toronto. McCaw signed with the Cavs on Dec. 30, 2018, but was released on Jan. 7. Three days later, he was picked up by the Raptors.

McCaw spent his first two years with the Golden State Warriors. He played in 128 games (30 starts) with the Warriors, averaging 3.7 points and 1.5 rebounds.

In each of McCaw’s three seasons, he was an NBA champion. His personal three-peat was the first since Kobe Bryant and Shaquille O’Neil accomplished the feat from 2000-2002.

–The Minnesota Timberwolves claimed point guard Tyrone Wallace off waivers from the Clippers.

Temple, 33, spent last season with the Memphis Grizzlies and Los Angeles Clippers, appearing in 75 games (career-high 55 starts) and averaging 7.8 points, a career-high 2.9 rebounds, 1.4 assists and 1.0 steals in a career-high 27.2 minutes per game.

Pinson agreed to a deal with the Nets two days after the team rescinded its qualifying offer to the 23-year-old to maximize cap space.

LAS VEGAS – Zion Williamson, the top overall pick in last month’s NBA draft, did not play in the second half of the New Orleans Pelicans’ first summer league game Friday in Las Vegas after taking a knee-to-knee hit in the first half.

ESPN’s Cassidy Hubbarth reported that the injury was to Williamson’s left knee and was not expected to be serious. New Orleans reportedly was acting primarily out of caution with its star rookie.

In the first half, Williamson played nine minutes, scoring 11 points on 4-of-9 shooting. The Pelicans were down to the New York Knicks 56-49 at the half.

Last season at Duke, Williamson missed the final five games of the regular season with a right knee injury after his Nike shoe blew out during a game against North Carolina.

On Friday, the summer league game was halted for good with 7:53 remaining in the fourth quarter after an earthquake shook the inside of the Thomas & Mack Center. The Pelicans led the Knicks 80-74 at the time.

Play was suspended for about 30 minutes and both teams were sent to their locker rooms, with arena technicians sent to check on the safety and status of the arena’s large speakers — hanging above midcourt — that remained swaying after the quake, according to ESPN’s televised report.

Hubbarth later reported that the NBA decided to postpone the game, in addition to the Phoenix Suns-Orlando Magic game scheduled at the arena later Friday night. The summer league games at the neighboring Cox Pavilion continued without major delay.

The earthquake was reported as a 7.1 magnitude with an epicenter of Ridgecrest, Calif., which was also the epicenter of a 6.4 quake on Thursday.

Denver Nuggets rookie forward Michael Porter Jr. sprained his left knee in a minicamp scrimmage Wednesday night and is not likely to play for the team in summer league action at Las Vegas, according to the Denver Post.

The upcoming summer league was finally a chance to see Porter play after he missed the entire 2018 season for Missouri while recovering from a back injury. He was selected 14th overall in the 2018 draft.

The injury is not expected to be serious, and Porter should be ready to play well in advance of the 2019-20 season opener.

Porter played in just three games at Missouri in the 2017-18 season, starting one. The 6-foot-10 forward averaged 10 points and 6.7 rebounds per game.

The Memphis Grizzlies are looking for trade partners in order to deal newly acquired forward Andre Iguodala and do not intend to buy out his contract before the season, ESPN reported.

The Grizzlies acquired Iguodala this week in a trade with the Golden State Warriors, who were looking to shed his $17.2 million salary for the upcoming season in order to sign D’Angelo Russell. A contract buyout of Iguodala, which would allow contenders to court him, was speculated for the rebuilding Grizzlies.

But the Grizzlies are reportedly now looking at the 35-year-old veteran as a trade chip in an effort to add young players to a rebuilt roster.

The Sacramento Kings opted for Yogi Ferrell over Frank Mason III. They waived Mason on the day in which they had to release Ferrell if they didn’t want to be on the hook for his $3.15 million contract for the 2019-20 season.

Ferrell, 26, averaged 5.9 points and 1.9 assists in 71 games (three starts) last season in his first campaign with the Kings. His scoring average was 10.2 points one season earlier, when he played 82 games (21 starts) for the Dallas Mavericks.

The two plan to hold a private workout for at least five teams on Monday in Las Vegas, ESPN’s Jordan Schultz tweeted late Wednesday. They both hope to sign with contending teams, according to Schultz.

Boston did not place a player on the first or second team stars.

Hart averaged an NBA Summer League-leading 24.2 points (on 47.1 percent shooting from the field), 5.2 rebounds and 1.5 steals in six games.  He scored 27 points and added six rebounds, three assists and three steals in the Lakers’ 109-92 victory over the New York Knicks on July 10.  In the tournament semifinals on July 16, Hart recorded 37 points and nine rebounds to lead the Lakers past the Cleveland Cavaliers 112-109 in double overtime.

“Ron Rothstein is most deserving of this prestigious recognition,” said Dallas Mavericks Head Coach and NBCA President Rick Carlisle. “Over several decades, Ronnie has helped countless players and coaches become their very best while continually helping promote the NBA game. I had the privilege to work with Coach Rothstein during the 2003-04 season. As an assistant for me in Indiana that year, Ron was a high impact contributor to our Pacers team that set a franchise record with 61 wins. More recently, Ronnie was top assistant to Erik Spoelstra during Miami’s run of back-to-back Championships in 2012 and 2013,” 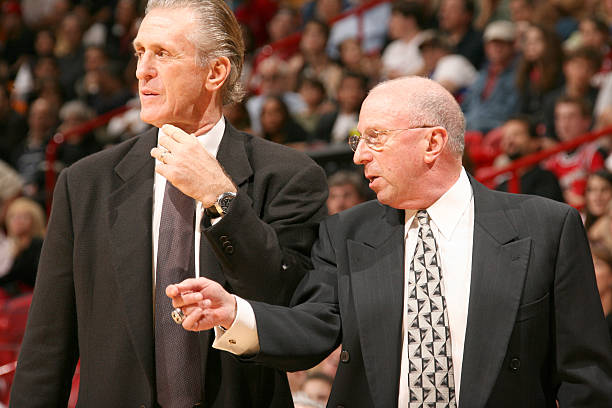 Then Head Coach of the Miami Heat Pat Riley (L) and Assistant Coach Ron Rothstein helps lead his team against the Utah Jazz on December 22, 2007 at the American Airlines Arena in Miami (Victor Baldizon/NBAE via Getty Images).

“I would like to thank the NBCA for the honor of being chosen as this year’s recipient of the Tex Winter assistant coach Lifetime Impact Award. This is not only an honor, it is also a truly humbling experience,” said Rothstein in accepting the award.

“Over the course of my 22 years as an Assistant Coach, I have been fortunate enough to work for seven outstanding Head Coaches. It all started in 1979 when Mike Fratello recommended me to Hubie Brown, then Head Coach of the Atlanta Hawks. Hubie hired me as a part-time regional NBA scout while I was still a high school teacher and coach. My first full-time Assistant Coaching job was with Mike Fratello and the Atlanta Hawks. Following that, I joined Chuck Daly and the Detroit Pistons. Next, I rejoined Mike Fratello with the Cleveland Cavaliers, followed by Rick Carlisle and the Indiana Pacers, and then finished the last 10 years of my coaching career with the Miami Heat, working for Stan Van Gundy, Pat Riley and Erik Spoelstra. Not many Coaches get as lucky as I did to work with and for so many brilliant and successful Head Coaches. I can’t thank them enough for all that they have done for my family and me over the course of my career,” he continued.

“Thanks, also, to the GM’s I have had the privilege to work for: Stan Kasten (Atlanta Hawks), the late Jack McCloskey (Detroit Pistons), Wayne Embry (Cleveland Cavaliers), Donnie Walsh/Larry Bird (Indiana Pacers) and Pat Riley (Miami Heat). Not many Coaches can put together a list like that. What a privilege it was to work for them.

“To all the players I have had the good fortune to work with, thank you for all that you have done to contribute to my success. Obviously, none of this was possible without your dedication, hard work, talent, and professionalism.

“Last but not least, a huge thank you to my beautiful wife of 51 years, Olivia, who has been by my side every step of the way, and to my children and grandchildren, as well, for all their love and support.”

Rothstein, who has spent over 50 years in the game and 26 years on an NBA bench, began his NBA career in 1979 as the northeastern U.S. regional scout for the Atlanta Hawks. In 1982, he moved to a similar position with the New York Knicks before becoming an Assistant Coach with the Hawks in 1983. After spending three seasons on the Hawks bench, Rothstein joined the Detroit Pistons coaching staff as an Assistant Coach in 1986 where he was credited with establishing the defensive mindset and principles that helped the Pistons reach the Eastern Conference Finals in 1987 and the NBA Finals in 1988.

Prior to joining the NBA, Rothstein was a high school coach for 19 years and was selected Westchester County (NY) Coach of the Year in 1979 while at Eastchester High School in New York.

Phil Johnson was the inaugural winner of the award, presented for the first time in 2016.