LOS ANGELES – It may not be known until close to game time whether or not the Los Angeles Clippers will have star forward Kawhi Leonard on the floor for Wednesday’s game against the Boston Celtics. Leonard has missed the past three games with a left knee injury and the Clippers are 7-2 when he plays and 2-3 when he sits out.

“We knew at the beginning of the year that this is how it would be,” Rivers said. “I don’t think one coach or one guy has even thought about it, that it would be nice to have everybody out there.”

Boston could be without a key player as guard Marcus Smart suffered a sprained right ankle in Monday’s 99-85 road win over the Phoenix Suns. Forward Jayson Tatum led the way with 26 points and a season-best 11 rebounds during the victory, which occurred one night after Boston’s 10-game winning streak was halted by the Sacramento Kings.

ABOUT THE CELTICS (11-2): Smart was optimistic that he may be able to play against the Clippers and will undergo further examination before a verdict is reached. “It was minimal swelling for it. I’m able to walk, I’m able to still shift and plant and move side to side, so that’s good,” Smart told reporters. “… We’d rather be safe than sorry and because it’s so early in the season, we don’t want to risk anything. We’ve got a day off, use it to get the treatment I need and be ready for the next game.”

Tatum’s double-double was his second of the season and he ranks second on the Celtics with a 20.2 average and leads the squad with a 7.5 rebounding average.

ABOUT THE CLIPPERS (9-5): Star forward Paul George has yet to play with Leonard since returning from offseason surgery on both shoulders. He is averaging 29.3 points over his first three games – scoring 33 points against the New Orleans Pelicans in his team debut on Thursday and adding 37 two nights later against the Atlanta Hawks before making the decisive 3-pointer with 25.9 seconds left while scoring 18 in Monday’s 90-88 win over the Oklahoma City Thunder, his former club.

“You know, there was a big thing about (how I) can’t make it to win games,” George said afterward of his clutch shot. “That stuff doesn’t bother me. I am out there to play hard and to win games. I feel confident in every shot that I take. It’s up to me to make it or miss it. That type of stuff don’t bother me.”

In order to acquire George, the Clippers will send guard Shai Gilgeous-Alexander and forward Danilo Gallinari to Oklahoma City. The Thunder also will receive four unprotected first-round draft picks, one protected first-round pick and two draft-pick swaps, according to the ESPN report.

Leonard, who led the Toronto Raptors to their first NBA championship after he was acquired in a trade from the San Antonio Spurs last July, reportedly selected the Clippers over the Raptors and Los Angeles Lakers.

Leonard, a 28-year-old Southern California native, averaged 26.6 points and 7.3 rebounds over 60 regular-season games with the Raptors in 2018-19. He then improved on that over 24 playoff games averaging 30.5 points with 9.1 rebounds.

In the NBA Finals, Leonard scored 28.5 points per game with 9.8 rebounds as Toronto defeated the Golden State Warriors in six games.

The three-time All-Star, who was drafted 15th overall by the Indiana Pacers in 2011, has averaged 17.7 points and 6.3 rebounds over 467 games (440 starts) with the San Antonio Spurs and the Raptors.

George, a 29-year-old who makes his offseason home in the Los Angeles area, averaged 28 points per game with 8.2 rebounds for the Thunder last season. In nine NBA seasons, George has averaged 19.8 points and 6.4 rebounds in 604 games (556 starts) with the Indiana Pacers and Oklahoma City.

The six-time All-Star played just six games in the 2014-15 season because of a serious leg injury. He reportedly requested a trade from the Thunder after Leonard had reached his deal with the Clippers, the ESPN report indicated.

Gallinari, 30, put up career bests of 19.8 points and 6.1 rebounds for the Clippers last season.

LOS ANGELES – The Boston Celtics have lost a season-worst four straight games and they look to break out of their sudden funk when they visit the Los Angeles Clippers on Wednesday. Boston opened a four-game road excursion with Tuesday’s 108-107 loss to the Los Angeles Lakers, which followed up Sunday’s stunning 103-95 home loss to the Orlando Magic, a squad now tied for the worst record in the NBA.

All-Star guard Kyrie Irving scored 33 points in Tuesday’s loss but didn’t receive a chance at a game-winning shot as teammate Marcus Smart grabbed a rebound with 5.7 seconds left and never gave up the ball before badly missing a 3-point attempt as time expired. “He felt like he had a good look, and we’ve got to live with the results after that,” Irving said afterward. The Clippers have dropped their last two games after winning 12 of the previous 15 to salvage their season. Power forward Blake Griffin had 32 points, matched his season best of 12 rebounds and posted a season-high 12 assists during Monday’s 126-118 loss to the Minnesota Timberwolves and is averaging 26.5 points, 10.5 rebounds and 6.3 assists over the past four games.

ABOUT THE CELTICS (34-14): Post player Al Horford is in the second season of a four-year, $113 million contract with the squad and accepted a complimentary role this season with Irving and injured small forward Gordon Hayward joining the mix. His teamwork and unselfishness were noted by NBA coaches, who voted Horford to a spot on the All-Star team when the reserves were announced Tuesday. “It makes me feel good because I feel like I’ve always taken a lot of pride in playing the right way and putting the team first always,” said Horford, who has only eight 20-point outings this season. “The coaches have seen that and have rewarded me over the years. It’s a big honor for me.”

ABOUT THE CLIPPERS (23-23): Shooting guard Lou Williams has kept Los Angeles in the playoff hunt with his stellar play that includes scoring 20 or more points in 15 of the past 16 games. But his solid campaign and career-best 23.3 scoring average didn’t result in an All-Star spot and Williams simply tweeted “Lol” when the television show announcing the reserves concluded. The team’s backcourt depth has been thin lately with Austin Rivers (heel) missing the last 12 games and coach Doc Rivers said his son will likely miss two more weeks.

1. The Clippers have won six of the past eight overall meetings, as well as the last five played at the Staples Center.

2. Smart scored 22 points against the Lakers – one shy of his season best. 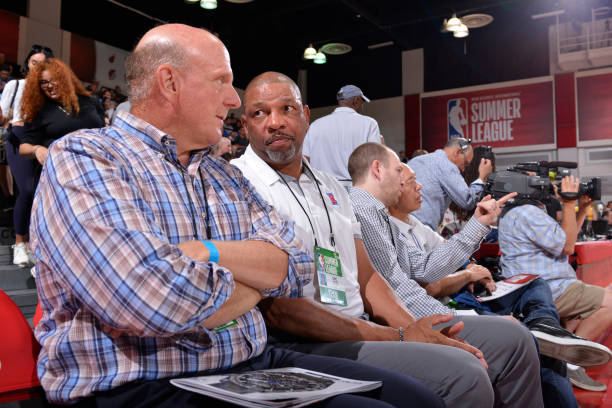 LAS VEGAS, NV – JULY 10: Doc Rivers and Steve Ballmer of the Los Angeles Clippers at the game between the Clippers and Bucks during the 2017 Las Vegas Summer League on July 10, 2017 at the Cox Pavilion in Las Vegas, Nevada  (David Dow/NBAE via Getty Images).

“Doc knows how to win championships,” Ballmer said in a news release. “That is what we prioritize, and that is what Doc will focus on. He is key to integrating our new players with our returning players and taking us to new heights on the court.”

Rivers will continue to have a strong voice in personnel and organizational matters and will partner with Frank, Ballmer later told ESPN on Friday.

“I’ve owned the team for three years now, and I really better understand what an owner’s responsibility is — and it turns out that running a franchise and coaching are two enormous and different jobs,” Ballmer told ESPN. “The notion that one person can fairly focus on them and give them all the attention they need isn’t the case. To be as good as we can be, to be a championship franchise, we need two functioning strong people building teams out beneath them. There needs to be a healthy discussion and debate with two strong, independent-minded people.

“There are different relationships that a player needs to have with the coach and the front office. Doc put Lawrence in charge of the non-coaching aspects of the front office last year, and he’s done a fantastic job. I want each of them to dig in and do what they do best. Lawrence has come on so strong in that role, and that has helped us go down this path.”

The Clippers now will be operating without Chris Paul, who was traded to the Houston Rockets in June after the All-Star point guard said he planned to leave the franchise in free agency.

“I want to have a world-class front office that identifies college and pro talent, that works with the agents and that has a long-range strategy that is based upon thinking through the analytics and options available to us,” Ballmer told ESPN.

Rivers and Ballmer promoted Frank to oversee the day-to-day operations of the front office a year ago. Frank is a two-time head coach with the New Jersey (now Brooklyn) Nets and the Detroit Pistons.

Rivers, who left the Boston Celtics to join the Clippers as the franchise’s top basketball executive and coach four years ago, inherited a depleted front office in the aftermath of former owner Donald Sterling’s racially-charged audio tape scandal.

Ballmer purchased the Clippers for $2 billion and ultimately signed Rivers to a five-year, $55 million contract extension to continue as president and coach in 2014.

In four years as Clippers coach, Rivers has a 217-111 regular-season record, including 18-22 in the playoffs. He reached the NBA Finals twice as Celtics coach, winning the 2008 championship

LOS ANGELES – (Special Preview to Digital Sports Desk by The Sports Xchange) – The return of Chris Paul has led to some uneven results for the Los Angeles Clippers, but they hope to produce their first winning streak since before the All-Star break when they host the Boston Celtics on Monday. The Clippers are 2-3 since Paul returned from a thumb injury after registering a 101-91 victory Saturday at Chicago.

Reserve Jamal Crawford scored 25 points and four starters reached double figures – including Paul with 17 – as Los Angeles secured its first win in regulation since Feb. 15. “I think it takes time. We’re still adjusting (to Paul being back),” Crawford told the Los Angeles Times. “But we’ll be fine.” The Celtics were just fine after opening their five-game road trip with a 20-point rout of the Los Angeles Lakers, but their visit to Phoenix on Sunday had a very different outcome. Two starters for Boston were out with injuries and All-Star Isaiah Thomas lost the ball for an ill-timed turnover in the closing seconds, leading to a buzzer-beating win for the Suns while denying the Celtics a third consecutive win.

ABOUT THE CELTICS (40-23): Thomas scored 35 points but, in addition to coughing up the ball under Phoenix’s basket in the waning moments, also missed a free throw that kept Boston’s advantage at just two points with 11 seconds to go. Al Horford (elbow) and Avery Bradley (hamstring) were absent for the loss, although the latter expects to play Monday. Jonas Jerebko replaced Horford in the starting lineup and missed all four of his shots as Boston finished at 37.6 percent, just a shade better than its season low (37.3).

ABOUT THE CLIPPERS (37-25): Paul is averaging 17.2 points and 8.4 assists since his return, and he has recorded 37 assists against only six turnovers over the last four games. J.J. Redick has snapped out of a shooting slump that dominated most of February by making at least 50 percent of his shots in three of his last four games, and Crawford’s big night at Chicago came after a six-game stretch during which he averaged 7.7 points. Monday marks the final time that retiring Clippers veteran Paul Pierce will face the Celtics, with whom he spent 15 seasons and won one NBA title.

2. Celtics C Kelly Olynyk was scoreless in 22 minutes at Phoenix and is 0-of-7 from 3-point range over his last four contests.