TORONTO – Steve Kerr still doesn’t know when star forward Kevin Durant will rejoin the Golden State Warriors, but the coach said that day is getting closer.

Durant won’t play Sunday night at Toronto in Game 2 of the NBA Finals, but conceivably could be cleared to play after just one practice, Kerr said.

Durant hasn’t practiced or played since injuring his right calf on May 8 during Game 5 of the Western Conference semifinals.

“It’s feasible,” Kerr said. “But again, it’s really a day-to-day thing. If we had a crystal ball, we would have known a long time ago what we were dealing with. It’s just an injury; there’s been a lot of gray area. So literally it’s just day to day and how the progress is coming. And at this point he’s still not ready.”

Durant was on the floor with the team to start Saturday’s practice but went to the locker room.

“Kevin is fine,” Kerr said. “He didn’t go through our shootaround. He’s with our trainer, so he’s out obviously. Another day, another step forward in his rehab progress.”

The series will move to Oakland, Calif., with Game 3 on Wednesday and Game 4 on Friday.

TORONTO – Golden State Warriors forward Kevin Durant is unlikely to play in Game 1 of the NBA Finals on Thursday against the Toronto Raptors. Durant missed the past five games with a right calf injury and he told reporters on Friday that he was initially worried that he had torn his Achilles tendon.

“I’ve seen the clip on the screen and it’s like ‘That’s the Achilles, that’s the Achilles,’ ” Durant told reporters. “Obviously, everybody is going to be a little nervous until someone reassured me that it’s not.”

The news was better for Warriors swingman Andre Iguodala (left calf) and big man DeMarcus Cousins (quadriceps). Coach Steve Kerr said Iguodala will be available for Game 1. Cousins scrimmaged on Friday and also has a chance at being ready for the opener.

OAKLAND – Kevin Durant is done for the rest of the Western Conference semifinals, and head coach Steve Kerr said the Golden State Warriors must grasp the task ahead: Replace the best player in the NBA.

“He’s been the best player in the NBA in the playoffs. He’s been phenomenal,” Kerr said Thursday night, confirming Durant is several days or more from being able to play basketball.

A return could potentially come in the Western Conference finals, but the Warriors, leading the Houston Rockets 3-2 in the semifinals entering Friday’s Game 6 at Houston, still need a win without Durant.

“Well, we’ll just find somebody on the bench who can give us 35 points, two blocks and 11 boards and nine assists,” Kerr said facetiously Thursday night.

The Warriors announced Thursday afternoon that after an MRI, Durant was diagnosed with a mild right calf strain and is not expected to be re-evaluated until next week.

“It’s obviously a huge loss. Our team has a lot of confidence,” Kerr said. “We trust each other. They’ve won championships together. So we come out and give it our best shot.”

Without Durant, the Warriors rallied to win Game 5 in Oakland, Calif., on Wednesday. But all is not yet lost. They are also 29-4 in games without Durant in which guard Steph Curry is available.

Durant’s status for the remainder of the postseason — if Golden State closes out the Rockets and advances to the Western Conference finals — is up in the air. Curry is also dealing with a dislocated finger.

Durant sank a fadeaway jumper with 2:05 left in the third to give the Warriors a 68-65 lead, then began hobbling as he turned to head up the court.

He immediately was replaced on the floor by Andre Iguodala. Less than a minute later, the Rockets took their first lead since 14-12 in the first quarter, but the Warriors rallied to win 104-99 and take a 3-2 lead in the best-of-seven series.

Durant will not travel to Texas with the team for Game 6 and instead will undergo treatment in hopes he can return for Golden State next week. The average recovery time for a mild calf strain is two weeks.

Because of the way Durant reacted, social media erupted with opinions — some educated — that Durant had torn his Achilles tendon.

“When I walked into the coaches’ office after the game, the replay of the play was going on, and I thought the same thing because he kind of looked back like he had been kicked or something,” Kerr said Wednesday night. “I (thought), ‘I’ve seen that before with guys who have hurt their Achilles.’ So that was my first question, and I was assured that it’s a calf strain and not the Achilles.”

Already thinned by injuries, the Warriors could be playing with an extremely short bench in Game 6.

Iguodala was questionable entering Wednesday’s game and the Warriors are still without DeMarcus Cousins (thigh).

“Honestly, it was a little deflating for a second,” Curry said of losing Durant, who was averaging 35.4 points per game in the playoffs entering Wednesday’s game. “Then we rallied. So all the different roller coaster of emotions tonight. At the end of day it’s about winning or losing, trying to endure to the finish line.

“… We’ll see what happens the next 24, 48 hours on the injury front. But we’ve had the next-man-up mentality for a long time now. Hopefully, the situation will be no different. It will be challenging. It’s tough to replace the output that KD has been doing this whole entire playoff run.”

OAKLAND – Warriors forward Kevin Durant limped off the court due to a right calf strain during the third quarter of Golden State’s game against the Houston Rockets on Wednesday in Oakland, Calif., and he missed the remainder of the contest.

His status moving forward in the postseason is unclear.

Durant sank a fadeaway jumper with 2:05 left in the third to give the Warriors a 68-65 lead in Game 5 of the Western Conference semifinals, then began hobbling as he turned to head upcourt.

He was immediately replaced on the floor by Andre Iguodala. Less than a minute later, the Rockets took their first lead since 14-12 in the first quarter, but the Warriors rallied to win 104-99 and take a 3-2 lead in the best-of-seven series.

After the game, Warriors coach Steve Kerr allayed fears that Durant had torn his Achilles tendon.

“It’s not the Achilles,” Kerr said. “When I walked into the coaches’ office after the game, the replay of the play was going on, and I thought the same thing because he kind of looked back like he had been kicked or something.

“I (thought), ‘I’ve seen that before with guys who have hurt their Achilles.’ So that was my first question, and I was assured that it’s a calf strain and not the Achilles.”

Durant will undergo an MRI on Thursday. He missed three games in January of 2018 with a right calf strain.

Durant, who scored 22 points in 32 minutes Wednesday, is averaging 33.2 points in the first four games of the series and 34.2 points in this year’s postseason. In the regular season, he averaged 26 points, 6.4 rebounds and 5.9 assists in 78 games.

The 30-year-old veteran was the NBA Finals MVP each of the past two years as the Warriors won consecutive championships, and he was the league MVP in 2013-14. Durant is a 10-time All-Star.

Durant is heading into free agency this summer amid numerous media reports that he might look to leave Golden State.

CLEVELAND  – (Special to Digital Sports Desk by The Sports Xchange) – The Cleveland Cavaliers find themselves in the same place through two games in the NBA Finals they were at this point last season.

Blown out in Games 1 and 2 by the Golden State Warriors, looking for something to change in the first home game before the series is over for all intents and purposes. 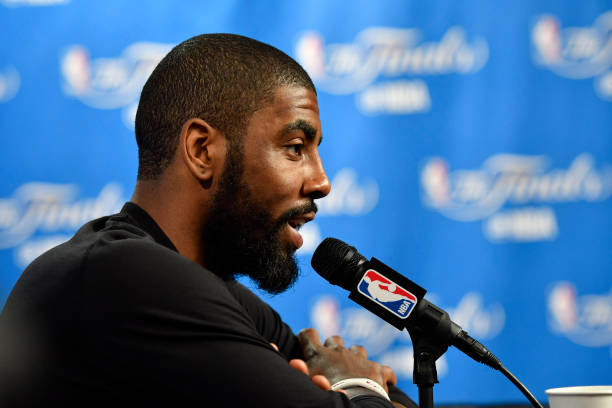 Kyrie Irving of the Cleveland Cavaliers addresses the media during practice and media availability as part of the 2017 NBA Finals. David Liam Kyle/NBAE via Getty Images).

Things turned out OK for the Cavs in 2016. They won Game 3 by 30 points and eventually became the first team in NBA history to recover from a 3-1 deficit to win the Finals.

“You understand the journey and how much of the energy it took from a mental and physical standpoint in order to come back from something like that,” said Cavaliers guard Kyrie Irving. “But you know it’s definitely possible.”

The Warriors have outscored Cleveland by 41 points through two games. They’ve blown the doors off of LeBron James and company in both games in the third quarters, outscoring the Cavs by 13 points in Game 1 and 11 on Sunday.

Kevin Durant wasn’t wearing a Golden State jersey while his current teammates collapsed in last year’s Finals. He has scored 71 points through two games. Harrison Barnes, the player Durant replaced in the Warriors’ lineup, scored 65 for the whole series.

Durant is a former MVP in the prime of his career who was added to a roster that won an NBA-record 73 games last season before the stunning Finals defeat. He is partnered with Stephen Curry, a two-time MVP who has scored 60 points through two games and is coming off a triple-double in Game 2.

And the Warriors point to Game 3 as the initial turning point.

“I think it was the nature with which they won that game, the force that they brought,” Warriors coach Steve Kerr said. “They blew us out. I don’t remember what the final score was, but it wasn’t close. And I thought that gave them confidence, gave their crowd confidence.

“We came back and won Game 4 in a great effort and had them right where we wanted them, but I think Game 3 gave them that confidence, and obviously everything changed in Game 5.”

Cavs coach Tyronn Lue said he is sticking with shooting guard J.R. Smith in the starting lineup despite his struggles. Smith has scored just three points in two games on 1-of-6 shooting.

Then again, Smith was scuffling through the first two games of last season’s Finals and came back with 20 points in Game 3.

“My confidence has never dwindled, lacked, chipped, nothing. I feel like when I’m on the floor, I mean obviously Bron is Bron, but I feel like I’m one of the best players on the floor.”

James is averaging a triple-double through two games, with 28.5 points, 13 rebounds, and 11 assists. Twice during his career he has led the Cavs back from an 0-2 deficit in a playoff series — in the 2007 Eastern finals against Detroit and of course last season.

“It’s something I am accustomed to,” James said. “It’s something that I feel like is — that it’s OK for me to kind of always go back and know that I can refocus. I can get my guys ready, get myself ready. But you hate to continue to put yourself in these positions.”

The Warriors are 14-0 to start the postseason. They’re the first NBA team to ever do it. With a win in Game 3 they would pass the 1992-93 Pittsburgh Penguins for the most consecutive playoff wins by any major professional sports team.

For what it’s worth, no team has ever recovered from a 3-0 deficit in the NBA playoffs. The Warriors are two wins from sweeping all four rounds, including the last one, against the defending champs.

“But we are here, we’re more focused on what happened last year like in terms of we were up 2-0 and we came here and the series shifted. That’s the important lesson, not any historical benchmarks or anything like that.”