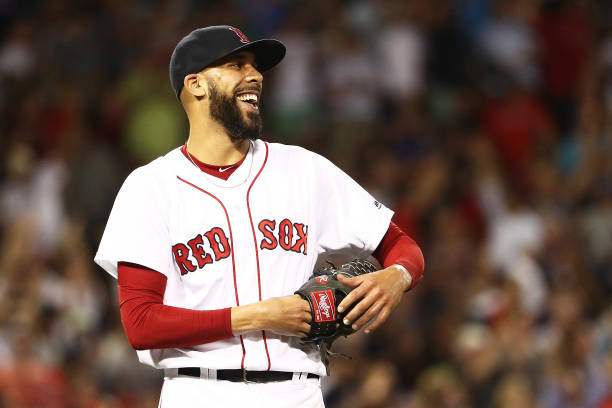 With the win, the Red Sox moved 3 1/2 games clear of both the Yankees and Tampa Bay Rays atop the American League East.

Price (5-2) allowed seven hits, walked none and struck out eight. Craig Kimbrel, who blew his third save of the season in Saturday’s 16-inning loss, pitched the ninth for his 24th save.

It was the first time the Yankees have been shut out this year.

Betts’ homer was his team-leading 17th. Dustin Pedroia also drove in a run for the Red Sox and tied Nomar Garciaparra for 16th place on Fenway Park’s all-time RBIs list with 380.

Masahiro Tanaka (7-9) took the loss after seven three-run innings, giving up seven hits and no walks while striking out nine.

No Yankees batter had more than one hit, with right-fielder Aaron Judge going 0-for-4 with two strikeouts to end a stretch of 42 consecutive starts where he reached base safely. Judge nearly brought New York within a run with his deep fly ball to center in the eighth, but Jackie Bradley Jr. reached up and made a spectacular catch to rob Judge of a two-run homer.

Betts’ two-out homer in the third inning snapped a stretch of 24 consecutive scoreless innings for Boston.  The blast came on a 1-1 slider from Tanaka and sailed an estimated 410 feet over the Green Monster in left field. 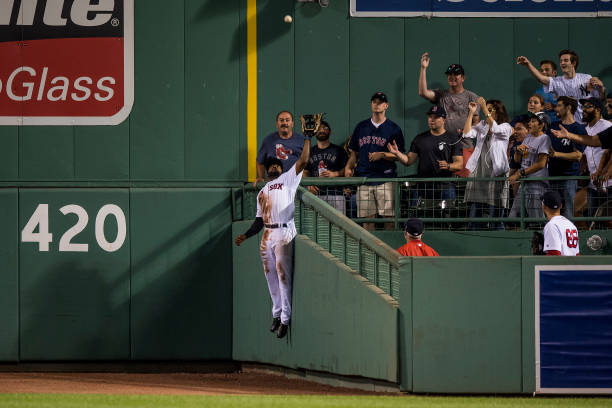 Jackie Bradley Jr.  of the Boston Red Sox leaps over the wall to rob a home run ball hit by Aaron Judge #99 of the New York Yankees during the eighth inning of a game on July 16, 2017 at Fenway Park in Boston, Massachusetts. (Billie Weiss/Boston Red Sox/Getty Images).

Garrett Cooper, who made his major league debut for the Yankees on Friday, doubled in the fifth for his first major league hit.  Pedroia made it 3-0 with his RBI single in the sixth.

Didi Gregorius doubled with one out in the ninth and Kimbrel walked pinch hitter Brett Gardner after a fly out to bring up another pinch hitter in Chase Headley, who struck out to end the game.

In New York’s victory in the opener, the Yankees got a solo homer from Gregorius, a sacrifice fly from Ji-Man Choi and an RBI single from Ronald Torreyes. CC Sabathia (8-3) tossed six scoreless innings to outduel Boston starter Rick Porcello (4-12).

NOTES: New York RHP Bryan Mitchell and Boston INF/OF Brock Holt were the 26th men for Sunday’s doubleheader. … Yankees SS Didi Gregorius’ fifth-inning homer to right field in Game One Sunday traveled 295 feet, per Statcast. However, the shortest home run distance to right at Fenway Park is listed as 302 feet. It was the shortest non-inside-the-park homer Statcast has tracked in the last three seasons. … Red Sox manager John Farrell said the team will follow through on its formal protest of Saturday’s game, despite New York DH Matt Holiday’s interfering slide back to first base in the 11th inning not having an impact on the final score. “If it goes unaddressed … who’s to say (you) can’t instruct runners to do the same going forward,” Farrell said. … The Yankees (starter TBA) will face Minnesota Twins LHP Adalberto Mejia (4-4, 4.43 ERA), and Red Sox LHP Eduardo Rodriguez (4-2, 3.54 ERA) opposes Toronto Blue Jays RHP Marcus Stroman (9-5, 3.28 ERA) on Monday

BOSTON – (Wire Service Report) – Cleveland Indians manager Terry Francona is pushing all the right buttons with his pitching staff in the American League Division Series and has a chance to clinch in a place that holds some special memories. Francona, who guided the Red Sox to two World Series championships as manager, tries to advance the Indians to the AL Championship Series when they visit Boston for Game 3 in the best-of-five set Monday, after Sunday’s scheduled game 3 was postponed due to rain.

Francona used Andrew Miller and Cody Allen each for a season-high 40 pitches in a 5-4 Game 1 victory and rode ace Corey Kluber, who missed time at the end of the season with a quad injury, for seven innings in Game 2’s 6-0 triumph. “I think everybody is just playing baseball,” Francona told reporters. “I think that’s what we know how to do. I think when you start thinking about other things that maybe we’re not so good at, we try to stay away from that and just play the game, and play the game as well as we can and see what happens.” The Red Sox led the league in runs scored and batting average during the regular season but struck out 22 times in the first two games and watched stars Dustin Pedroia, Mookie Betts, David Ortiz, Xander Bogaerts and Jackie Bradley Jr. go a combined 4-for-36. “We’re getting our (butts) beat,” Ortiz told reporters. “Nothing to celebrate. It’s part of the game, man, but I know we’re better than that.”

Tomlin was an unlikely candidate to start a postseason game for Cleveland when he was struggling to get outs in August and was briefly demoted to the bullpen, but a strong finish and injuries to Carlos Carrasco and Danny Salazar pushed him up to Game 3 status. The 31-year-old Texan posted a 1.75 ERA in his final four appearances during the regular season, capped by a win at Kansas City that helped guarantee the Indians homefield advantage in the ALDS. Tomlin is 2-3 with a 5.49 ERA in seven career games (six starts) against Boston, including a tough-luck loss Aug. 15 when he allowed three runs in 7 2/3 innings.

Buchholz is another unlikely Game 3 starter after being pushed back to the bullpen because of ineffectiveness earlier in the season but – like Tomlin – a strong closing stretch convinced the team to push him up. Buchholz surrendered three runs and 11 hits in 19 innings over his final three regular-season starts. The 32-year-old Texan is 2-2 with a 4.85 ERA in seven career starts against Cleveland but struggled in two chances this season, allowing a combined nine runs (eight earned) and seven walks in 10 innings.

2. Indians 3B Jose Ramirez, who finished seventh in the AL in batting – behind Betts, Pedroia and Ortiz – in the regular season, is 4-for-7 in the series.

3. Boston has twice recovered from 2-0 deficits after losing the first two on the road to win ALDS series – in 2003 against Oakland and 1999 against Cleveland.