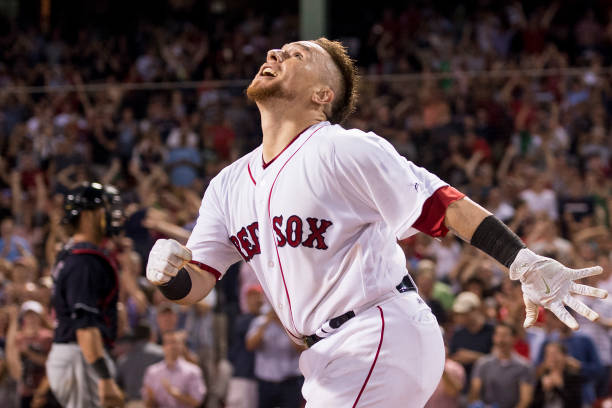 Christian Vazquez of the Boston Red Sox reacts after hitting a game-winning, three run home run during the ninth inning of a game against the Cleveland Indians on August 1, 2017 at Fenway Park in Boston, Massachusetts. (Billie Weiss/Boston Red Sox/Getty Images).

BOSTON — So much for a pitchers’ duel.

With Boston’s Chris Sale and Cleveland’s Carlos Carrasco on the mound Tuesday night, it seemed like a low-scoring affair would almost be a certainty.

Sale and Carrasco gave up a combined 12 earned runs. Both teams’ batters combined to slug six home runs, and wild pitches proved to be costly.

Christian Vazquez put an end to the chaos in the ninth inning with his walk-off, three-run home run to lift Boston to a 12-10 victory over Cleveland at Fenway Park.

Indians closer Cody Allen (0-6) got Mitch Moreland to strike out on a wild pitch for what would have been the final out of the game, but the ball skated to the backstop and put runners on first and second for Vazquez.

Another wild pitch with Vazquez at the plate allowed the two runners to advance, but it mattered little as Vazquez belted an estimated 408-foot homer onto the Green Monster in left-center.

“I’m not trying to hit one (a home run), no,” Vazquez said of his approach at the plate before his first career walk-off homer. “I was trying to drive the ball (to) the middle of the field.”

Jose Ramirez had scored on a Craig Kimbrel wild pitch in the ninth to put Cleveland up 10-9 after Kimbrel blew his fourth save by allowing a game-tying solo homer to Francisco Lindor.

Eduardo Nunez had three hits and four RBIs, Mitch Moreland crushed his 13th home run — a three-run shot — and Brock Holt and Mookie Betts each had an RBI for the Red Sox.

Boston (58-50) won its second straight game, having taken the series opener 6-2 on Monday. The Red Sox jumped a half-game ahead of the Yankees atop the American League East after a New York loss.

Brandon Guyer and Edwin Encarnacion each clubbed two-run homers for the Indians, their second and 22nd, respectively, and Carlos Santana (15th) and Lindor (17th) each crushed solo shots.

Santana had three RBIs and Michael Brantley also drove in a run for Cleveland (58-47), which has dropped three straight after its season-high, nine-game winning streak.

“You talk about a roller coaster game,” Indians manager Terry Francona said. “It’s a tough one to lose. I think that’s kind of stating the obvious.”

Red Sox starter Chris Sale was knocked around to the tune of a season-worst seven runs, eight hits and a walk in five innings, ending his scoreless streak at 21 1/3 innings.

Sale, who struck out five, had not allowed a run in his last three starts coming in. The last time he allowed seven or more runs was July 8, 2016, when he coughed up eight to the Atlanta Braves as a member of the Chicago White Sox.

“Just command,” Sale offered as a reason for his unusually poor start. “Left a lot of pitches over the plate. With a team like that, you can’t do that obviously. The big thing that really got me tonight was not keeping the ball in the ballpark.”

“When you jump out 5-0 on Sale, man, that’s doing something,” Francona said. “Then they came storming back. From there it was just back-and-forth.”

Kimbrel, despite blowing the save, got the win and improved to 3-0.

Indians starter Carlos Carrasco departed with two outs in the second after giving up five runs, six hits and three walks (plus one intentional) with one strikeout.

“Wish we had thrown the ball a little bit better as a staff all-around,” Allen said after blowing just his second save of the season.

Nunez’s two-run double with one out in the sixth plated three runs as Chris Young scored on a throwing error to the plate by the Indians’ Jose Ramirez to put Boston up 9-7.

Betts had brought the Red Sox within a run two at-bats earlier on his RBI infield single.

Santana crushed a leadoff home run to right off new Red Sox eighth-inning man Addison Reed, acquired from the New York Mets on Monday, to bring Cleveland within a run.

Encarnacion’s bomb in the fifth, which traveled approximately 351 feet and bounced off the “AAA” sign on the Green Monster in left field, gave Cleveland a 7-5 lead.

Austin Jackson made a stunning catch to rob Hanley Ramirez of a home run to lead off the Boston fifth, flipping over the bullpen wall in center and hanging on for the catch.

Ramirez mouthed “whoa” in disbelief after the play and the Fenway Park crowd gave Jackson a standing ovation after the catch was confirmed by a crew-chief review.

“That was one of the best catches I think I’ve ever seen,” Francona said of Jackson’s catch. “I’ve been in the game a long time. That’s a hard wall out there. A lot of guys run away from it. Austin went up and over.”

Cleveland scored three runs in the first off Sale, who had allowed three earned runs combined in 21 previous first innings this season.

NOTES: Boston placed 2B Dustin Pedroia (left knee inflammation) on the 10-day disabled list and added RHP Addison Reed, acquired in a deadline-day trade Monday, to the 25-man roster. Pedroia missed three straight games before landing on the DL. “He’s dealt with quite a bit of pain,” manager John Farrell said. “For all of us that know Pedey, he’s going to find a way (back). And I can’t say that when he comes back he’ll be pain-free, but … felt like this was the best move at the moment.” … Cleveland activated veteran RHP Joe Smith, acquired in a trade with the Toronto Blue Jays on Monday, and optioned RHP Shawn Armstrong to Triple-A Columbus. … Indians 2B Jason Kipnis (right hamstring strain) began a rehab assignment with Double-A Akron, going 0-for-4 with two strikeouts. … Indians RHP Trevor Bauer (9-8, 5.25 ERA) opposes Red Sox RHP Rick Porcello (4-14, 4.55 ERA) on Wednesday.

Based on the new start times, Fenway Park gates will open at noon on Saturday.