BOSTON – With a pair of terrifying incidents involving fans and flying projectiles in AL East ballparks still fresh in people’s minds, the Boston Red Sox announced “a dramatic expansion” of protective netting in time for the start of next season.

While MLB recommends netting stretch from dugout to dugout around home plate, the new Fenway plan will stretch the nets to Section 79 on the left field side and Section 9 along right field. Both sections are well beyond the edge of the dugouts.

In June 2015, 44-year-old Tonya Carpenter was struck in the head by a broken bat while sitting along the third base side of the stands at Fenway, beyond the protective netting in place at the time. Her injuries were originally called life-threatening and required surgery.

In September of last season, a 105-mph foul ball off the bat of the Yankees’ Todd Frazier struck a 1-year-old girl in the face at Yankee Stadium. The girl, sitting behind the third base dugout at the time, suffered facial fractures and bleeding on the brain and spent nearly a week in the hospital, with doctors at the time unsure of her exact long-term prognosis.

The Yankees earlier this month revealed a plan to expand netting similar to that of the Red Sox.

Ticket proceeds from both matchups will be donated to charity. Proceeds from the Army-Navy game will benefit the Home Base Program, a partnership between Massachusetts General Hospital and the Red Sox Foundation that helps veterans suffering from PTSD and other “invisible wounds of war.”

Boston College’s annual ALS game played in honor of former captain Pete Frates, who was diagnosed with ALS in March 2012, will benefit the Pete Frates Home Health Initiative – a pilot program of the ALS Association and its Massachusetts Chapter that provides in-home caregiving assistance for individuals living with ALS in Massachusetts who cannot otherwise pay for services.

Since Frates’ diagnosis with ALS, the Eagles have held an annual ALS Awareness Game at Eddie Pellagrini Diamond at Commander Shea Field. This will be the second year the charity game will be held at Fenway Park. Army’s April 20 matchup is the first time the Black Knights will host a baseball game at Fenway Park.

Ticket information for both games will be announced at a later date.

BOSTON – Freshman AJ Dillon ran for 200 yards and two touchdowns and Boston College became bowl-eligible with a 39-16 nonconference rout of Connecticut at Fenway Park in Boston on Saturday night.

Jon Hilliman ran for 107 yards and two touchdowns as the Eagles (6-5) won for the fourth time in the last five games. Prior to that, the BC season was going nowhere and there was talk of coach Steve Addazio losing his job. But he now has four bowl bids in his five years at the Heights.

Dillon, already BC’s all-time leading freshman rusher, had a 53-yard touchdown run among his 24 carries, while Hilliman ran 38 yards for a score as BC sent UConn (3-8) to its fourth straight loss.

Darius Wade, who will start at quarterback for Boston College for the remainder of his senior year after starter Anthony Brown was lost for the season in the previous game, was 7 of 15 for 55 yards and a 2-yard touchdown pass to Chris Garrison. It was Garrison’s first college touchdown.

Defensive back Taj-Amir Torres returned an interception of a David Pindell pass 65 yards for the Eagles’ other touchdown.

UConn opened the scoring on a career-best 50-yard field goal by Michael Tarbutt and was in position to make it 6-0 when Tarbutt had a 33-yard field goal blocked by Wyatt Ray in the first-half rain.

Down 39-3, the Huskies scored two fourth-quarter touchdowns — one on a 70-yard run by Kevin Mensah and the other on a 33-yard pass from Pindell to Hergy Mayala, Mayala’s sixth TD catch of the season.

Pindell finished 14 of 33 for 241 yards, the touchdown and three interceptions, while Mensah ran for 115 yards on 16 carries.

Even though Fenway was once the home of BC football, this was only the Eagles’ second game there since 1956 — and UConn was actually the home team. With the win, the Eagles improved to 55-17-5 all-time at the oldest stadium in the country — and to 12-0-2 all-time against UConn.

BOSTON – (Special to Digital Sports Desk by The Sports Xchange) – The Houston Astros and Boston Red Sox might be seeing a lot of each other in the next two weeks. If the Red Sox are able to wrap up the American League East, which they lead over the New York Yankees by three games, they might be matched up with the Astros in the AL Division Series.

Boston and Houston begin a four-game, season-ending series Thursday night at Fenway Park, and both teams still have much to play for.

Houston (98-60) has long since wrapped up the AL West title, and it capped a three-game sweep of the host Texas Rangers with a 12-2 victory Wednesday.

However, the Astros are still in contention with the Cleveland Indians (99-59) for the best record in the AL.

“This is an important stretch for us,” said Houston’s George Springer, who hit a grand slam Wednesday. “We know we’re heading to the playoffs, and to have the whole team top to bottom swinging the bats, I thought the pitching staff again was great. … It (was) a good three games for us.”

The Astros outscored the Rangers 37-7 in the series.

Meanwhile, the Red Sox have had trouble putting away the Yankees in the division race, but their magic number to clinch the division is down to two.

The Red Sox can clinch the division with a victory Thursday and a Yankees loss to the Tampa Bay Rays.

Boston (92-66) had won six straight and nine of 10 before losing two of three this week to the last-place Toronto Blue Jays. The Red Sox avoided a sweep with a 10-7 victory on Wednesday.

Should the Red Sox win the AL East, they would face the Astros or Indians in the best-of-five ALDS. The next two days could decide a lot about the order of the Red Sox’s postseason rotation, too. After Chris Sale and Drew Pomeranz, that is.

Rodriguez (6-6, 3.91 ERA) takes the ball in the opener against the Astros, and Fister will pitch Friday.

Fister is the only member of the Red Sox’s current rotation with a playoff victory, but a strong showing from Rodriguez could leapfrog him into the No. 3 spot.

“That’s going to be the best feeling in the world,” Rodriguez said about potentially starting a playoff game. “That’s what everybody who’s started a game in the playoffs has told me already.”

The young southpaw has only faced the Astros once, during his rookie season on July 5, 2015, at Fenway Park. Rodriguez allowed one run and six hits with two walks and a then-career-high eight strikeouts in five innings.

AL MVP contender Jose Altuve is 0-for-3 with two strikeouts lifetime against Rodriguez. Carlos Beltran (2-for-8) and Jake Marisnick (1-for-2) each have one RBI against him.

Brad Peacock (12-2, 2.98 ERA) has certainly shown off his feathers this season, and a 13th victory Thursday would place a bow on top of his career year.

The right-hander entered the 2017 season with 11 career victories, a total he matched Sept. 14 against the Los Angeles Angels and surpassed in his last outing on Sept. 20 against the Chicago White Sox.

Brock Holt is 2-for-4 with a solo home run against Peacock. Dustin Pedroia is 3-for-6 and Mitch Moreland is 1-for-11 with six strikeouts lifetime against Peacock 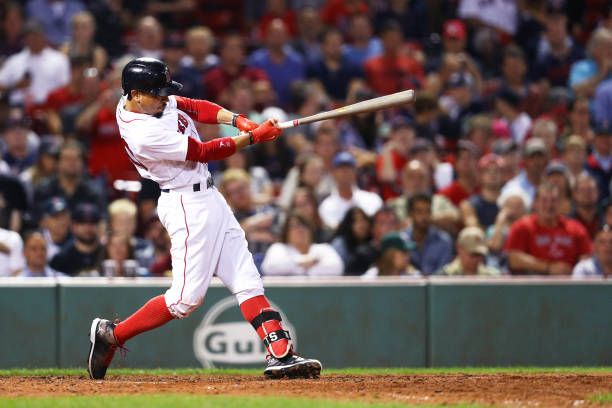 Mookie Betts of the Boston Red Sox at bat during the eighth inning against the Oakland Athletics at Fenway Park . (Maddie Meyer/Getty Images)

Drew Pomeranz has won nine of his last 10 decisions to insert his name among the contenders for the American League Cy Young Award while strengthening the Boston Red Sox in their quest to win the AL East title. The 28-year-old looks to bolster both bids on Thursday afternoon as the Red Sox play the rubber match of their three-game series versus the visiting Oakland Athletics.

Jed Lowrie drove in a pair of runs to highlight his three-hit performance in Wednesday’s 7-3 rout, improving to 11-for-23 with two homers, six RBIs and five runs scored this season versus his former team. Lowrie has hit safely in 10 of his last 11 games overall and is 4-for-7 with a homer in his career against Pomeranz. AL West cellar-dwelling Oakland hasn’t had much reason to cheer this season, but it has won six of seven outings overall and four of six encounters against the Red Sox. California native Dustin Pedroia collected back-to-back three-hit performances to extend his hitting streak to 26 games versus Oakland, although Boston’s de facto captain saw his team’s lead in the AL East over the second-place New York Yankees trimmed to three games.

Gossett picked up his first win since Aug. 2 in the opener of a doubleheader on Saturday after recording a career-high seven strikeouts and allowing one run over six innings in an 11-1 rout of Houston. “What I take out of this one is I got to be consistent,” the 24-year-old said. “Location was a little bit better. It was OK.” Gossett will be making his 15th career start and first versus Boston.

Pomeranz improved to 8-2 in 14 starts at Fenway Park on Friday after permitting two runs on as many hits in six innings of a 9-3 victory versus Tampa Bay. The left-hander was left with a no-decision at Oakland on May 20, as he yielded two runs while striking out six in just four innings. The short outing didn’t sit well with Pomeranz, who was captured on video of having a spirited conversation with manager John Farrell in the dugout before being told to hit the showers.

1. Boston SS Xander Bogaerts is 4-for-7 with three runs scored in the series.

2. Oakland rookie 1B Matt Olson is 7-for-15 with three home runs, six runs scored and six RBIs in his last five contests.