FOXBORO – (wire Service Report by The Sports Xchange) – The New England Patriots activated linebacker Dont’a Hightower from the physically unable to perform list. A defensive captain, Hightower had been nursing an undisclosed physical ailment that kept him off the field in voluntary spring practices. He had been wearing a brace over his right knee during the start of training camp. 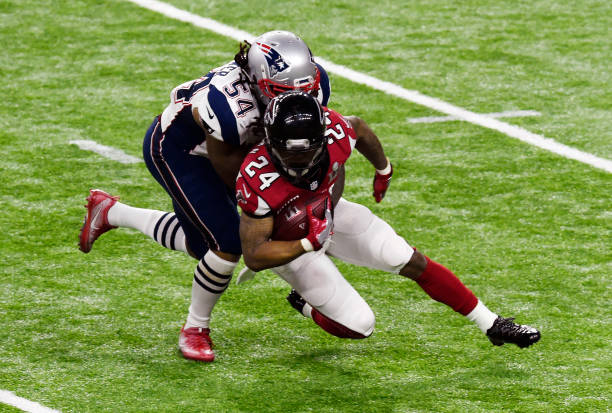 HOUSTON, TX – FEBRUARY 05: Devonta Freeman #24 of the Atlanta Falcons gets tackled by Dont’a Hightower #54 of the New England Patriots during Super Bowl 51 at NRG Stadium on February 5, 2017 in Houston, Texas. The Patriots defeat the Atlanta Falcons 34-28 in overtime. (Focus on Sport/Getty Images).

Hightower signed a four-year contract extension this offseason with a base value of $35.5 million and more than $17 million in guaranteed money.

The 27-year-old Hightower’s fourth-quarter strip sack of Atlanta Falcons quarterback Matt Ryan was one of the key plays in Super Bowl LI, helping the Patriots complete their rally from a 25-point deficit to win the contest.

Hightower had 65 tackles and 2.5 sacks last season. He has 372 tackles and 17 sacks in his career since being selected by New England with the 25th overall pick of the 2012 draft

CLEVELAND — (Wire Service Report) – Tom Brady made his return to the NFL in impressive fashion on Sunday, passing for three touchdowns and 406 yards as the New England Patriots trounced the Cleveland Browns 33-13.

Brady returned from a four-game suspension for his involvement in Deflategate in the 2014 AFC championship game to throw three touchdown passes to tight end Martellus Bennett. Brady finished 28-of-40 passing.

The Browns (0-5) are the only winless team in the NFL and for the third time in five weeks they lost more than a game.

Cody Kessler, already the third quarterback to start for the Browns this season, was knocked out of the game with chest and rib injuries late in the first quarter when he was drilled by Patriots linebacker Dont’a Hightower attempting a pass near the Cleveland goal line. The ball rolled out of the back of the end zone and was ruled a safety.

Robert Griffin III suffered a broken bone in his left shoulder in the opener and Josh McCown suffered a broken collarbone in the next game for the Browns. Both quarterbacks finished, but Kessler was unable to continue. Charlie Whitehurst replaced him.

New England (4-1) wasted no time washing out the taste of the 16-0 loss to the rival Bills last Sunday. The Patriots won the toss, deferred and held the Browns without a first down on Cleveland’s first possession.

The Patriots moved 80 yards on eight plays the first time they had the ball on five passes by Brady and three runs by LaGarrette Blount. Blount, who began the day second in the AFC in rushing behind the Browns’ Isaiah Crowell, finished off the drive with a 1-yard touchdown run around left end.

The Browns tied the score on their second possession on an 11-yard touchdown pass from Kessler to Andrew Hawkins to the left side of the end zone. Kessler showed poise in the drive and in his three starts with the Browns, but has nothing to show for it in the win column.

The Patriots’ offense made it 14-7 on Brady’s first touchdown pass to Bennett the next time they had the ball, and following the safety increased the lead to 23-7 on a 5-yard pass from Brady to Bennett. New England scored on the opening drive of the third quarter on a 37-yard Brady-to-Bennett hook-up.

The Browns scored their second touchdown on a 17-yard pass from Whitehurst to tight end Connor Hamlett with 14:05 to play.

NOTES: The Patriots put QB Jacoby Brissett on injured reserve with a thumb injury. He is recovering from surgery. … Browns rookie DE Carl Nassib returned to the active roster after missing two games with a broken hand. … Patriots DL Woodrow Hamilton, an undrafted rookie, was activated from the practice squad. … Browns CB Tramon Williams missed his second straight game with a shoulder injury. The Browns were hopeful he could play but he was limited in practice all week.