NEW YORK – Traditionally the summer months do not bring about much activity in the sports business world. The juggernauts of the winter sports calendar, the National Basketball Association and the National Hockey League end their seasons with the crowing of a new champion at the annual NBA Finals and the awarding of the Stanley Cup, the most coveted trophy in all of sport.

When the Pittsburgh Penguins and the Golden State Warriors accepted their hardware, sports execs closed the books on hockey and men’s basketball for 2016-17 and the respective league drafts turned the page to look towards the fall and 2017-18 when the two leagues begin training camp. 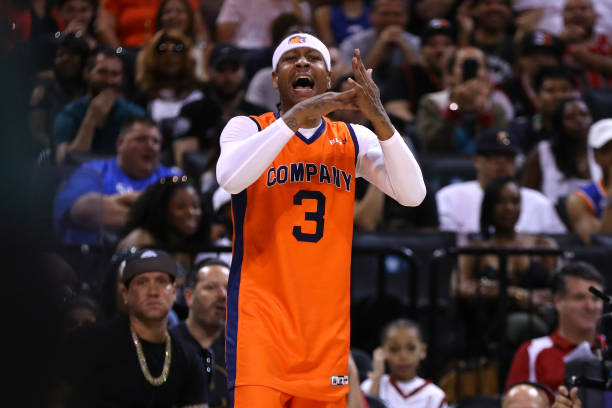 Allen Iverson of 3’s Company reacts in the game against the Ball Hogs during week one of the BIG3 three on three basketball league at Barclays Center on June 25, 2017 in New York City. (Mike Stobe/Getty Images) 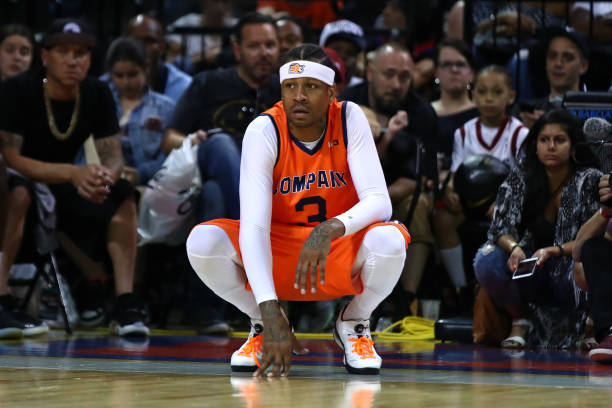 Allen Iverson of 3’s Company reacts in the game against the Ball Hogs during week one of the BIG3 three on three basketball league at Barclays Center on June 25, 2017 in New York City. (Al Bello/Getty Images)

###
Injuries are the proverbial “elephant in the room” for the Big 3.
Two of its stars – Jason “White Chocolate”  Williams and Corey Maggette suffered injuries which cause them limp off the court, never to be seen nor reported on again. Both suffered apparent leg, knee or Achilles injuries and were scheduled to have MRIs on Monday, according to Mason. Kenyon Martin was sidelined with “a tweaked hamstring” but is planning to participate in next week’s Big 3 event in Charlotte.
“We don’t know yet,” said Mason after his Hashtag Sports presentation. “they’re going for an MRI today.”
“Just like any sport or any league, we’re going to have injuries, he said, noting the 3×3 format should cut down on basketball-related injuries as compared to a 5×5 game, a fact certainly not valid for emergency room physicians who treat aging weekend warriors who’ve blown out many a knee, pulled a hamstring or torn an Achilles Heel or two in 3×3 half-court games across America.
“In our business model, each team has an injured reserve player and we have about 20 players that went undrafted. We have some guys, like Steve Francis, some big names that are waiting in the wings.” 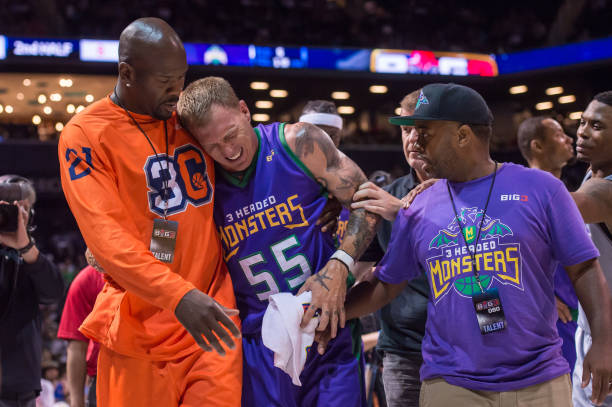 3 Headed Monsters player Jason Williams (55) is helped off the court after an injury during a BIG3 Basketball League game on June 25, 2017 at Barclays Center in Brooklyn, NY (John Jones/Icon Sportswire via Getty Images)

Mason took an NFL-like approach to the fact injuries are, indeed, part of the game. However, the lack of information provided by The Big 3 at the event or to media attempting to gather accurate information and inform basketball fans of the fate of their old-time stars, placed the league in a minor league, barnstorming, traveling snake-oil salesman, mode of operation, rather than a buttoned down operation where injury reports, team doctor statements and expected down time are the very basics of a professional operation.
Instead, The Big 3 will march on.
Iverson quickly indicated to fans and media in Brooklyn not to expect to see too much of his 42-year old bones in the events of the future, yet he plans to stay on as a coach and captain of the 3’s Company.
Only “Father Time” will tell if too many Achilles Heal injuries become the very Achilles Heel for the league. Team doctors and rebounding seem to be the most sought after commodity for The Big 3 after week one.
Sadly, we all know, “Father Time” is  … Undefeated.
4
SHARES
ShareTweet