NORTON – (Wire Service Report for Digital Sports Desk by The Sports Xchange) – Jon Rahm of Spain had an uneven second round at the Dell Technologies Championship in Norton, Mass., but he finished with a 5-under-par 65 on Saturday to give him a two-stroke lead heading into today’s third round. 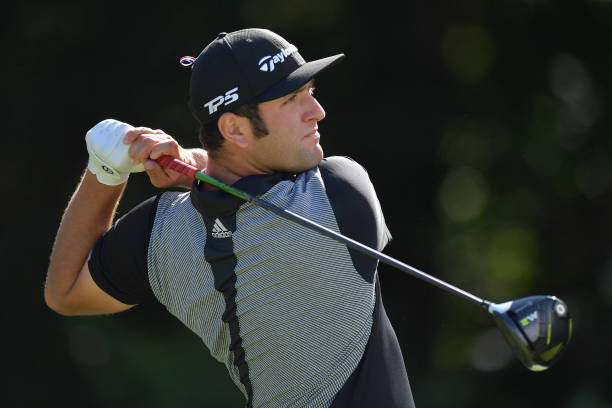 Jon Rahm of Spain plays his shot from the 14th tee during round two of the Dell Technologies Championship at TPC Boston. (Drew Hallowell/Getty Images).

Rahm, who started on the back nine, had a bogey and a double bogey on his first seven holes, but had five birdies and an eagle on his final 10 holes of the day. It gave him a two-round total of 9-under 133, two shots ahead of four players tied at 7-under — Adam Hadwin of Canada, who shot a 65 Saturday, Paul Casey of England (65), Kyle Stanley (68) and Kevin Streelman (65).

“Man, it felt like very different, that front nine and back nine, it was a big difference,” Rahm said. “You know, I don’t know what to say. I played a nearly perfect back nine. Felt like I didn’t miss a shot. I felt I putted for birdie pretty much from every hole from a really close distance. Nothing to say about that one.

“But that front nine is the one that probably looked worse than what it felt. Felt like I was making great swings. You know, they were going on line, hitting the shots that I wanted. I feel like we misjudged the wind a couple times or we got a couple gusts, and probably got the worst of it. Ended up missing greens.”

Dustin Johnson, the No. 1-ranked player in the world who trailed Rahm by one shot after the first round, also had an uneven day, but he was unable to save his round.

Johnson shot a 1-over 72 to drop to 4-under for the tournament, putting him in a tie for 15th. He had two bogeys and two double bogeys to go along with five birdies for the round.

Phil Mickelson shot a 4-under 67, leaving him tied for sixth at 6-under with Grayson Murray, Bryson DeChambeau and Marc Leishman.

“It’s fun to get in contention,” Mickelson said, “and it’s fun to start shooting some scores that I feel like I’ve been playing well enough to shoot. But it’s been a good first two days.

“It’s encouraging. It’s been so frustrating to know that I’ve been striking it or playing at a certain level and the scores haven’t reflected it. It’s been frustrating being on the course and not being able to visualize or see the shot I’m trying to hit and make a swing without much purpose or direction.”

Rory McIlroy followed his first-round 72 with a 3-over 74 to miss the cut. McIlroy won here last year.