Seventh in a Series

BOSTON – To mark the tee-off of the PGA Tour’s 2017 FedEx Cup Playoffs, Digital Sports Desk (@DigSportsDesk) has assembled another segment in our year-long series, entitled – DIGGIES 2017: The Must-Follow Twitter accounts for the PGA Tour. It’s our seventh entry in a series of sports and sports business recommendations by Digital Sports Desk, with this edition focusing on the world of professional golf. It’s the first version undertaken by @DigSportsDesk for the sport of golf and we’ve  highlighted some obvious choices to help fans follow the action, but we’ve also provided some “slightly different” people/places/things to consider with the goal to enhance your enjoyment of the upcoming FedEx Cup playoffs while staying fully informed.

Without further ado we give you: DIGGIES 2017: Must-Follow Twitter Accounts for the PGA Tour.

@PGATourLive – the official feed and account of the PGA Tour’s OTT coverage of nearly every tournament and every hole which allows fans access to coverage beyond what you’ll see on The Golf Channel or the networks.

@PGATourRules – Just because there are rules to this great game that must be respected at all times, even on social media

@GolfonCBS – the official home of the sport of golf on the CBS Sports network (CBS Sports carries this weekend’s Northern Trust Open but then the coverage switches to Golf Channel and NBC Sports the rest of the way. 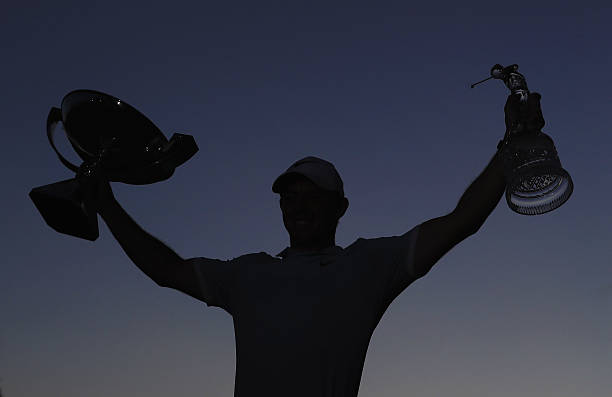 Rory McIlroy of Northern Ireland poses with the FedExCup and TOUR Championship trophies after his victory over Ryan Moore with a birdie on the fourth extra hole during the TOUR Championship at East Lake Golf Club on September 25, 2016 in Atlanta, Georgia. (Sam Greenwood/Getty Images).

@playofffinale – The official twitter feed of the TOUR Championship, held September 21-24 at the East Lake Golf Club in Atlanta – the traditional finale for the FedEx Cup Playoffs and the end of the 2017 pro golf season.

@eastlakegc – Home course for the final leg of the PGA’s FedEx Cup Playoffs.

@Fehertwit – Official account of golf tv commentator and personality David Feherty, who is simply one of a kind.

@SiriusXMPGATour – Official account from the people who bring you weekly coverage of the tour on satellite radio and via PGATour.com

@JohnMaginness – Twitter feed from host of Katrek and Maginness on Tap – the best golf-related radio show on the planet, brought to you on Sirius XM radio

@PGAcom – Account for the PGA of America, and all the golf club pros and instructors everywhere

@JackNicklaus – Just because II. The Golden Bear’s twitter feed is a must.

@NoLayingUp – The justly named Golf fanalysts with a worthy podcast, too

@TaylorMadeGolf – Account for some of the greatest golf equipment ever made

@Titleist – Official account for the No. 1 ball on tour

A FAVORITE FOURSOME of PLAYERS: (We could easily list a dozen or a full 125-player, Fed ExCup, Northern Trust Open tournament-sized field of PGA players, but we’ll narrow it down to these four who are, coincidentally, our choices to win the 2017 FedEx Cup):

@DJohnsonPGA – Official account for Dustin Johnson,currently  the world’s No. 1 this year

@RickieFowler – Account for one of the very best, in golf and at social. Can he get hot as the FedExCup comes around? Last year, he did.

We’re open to your suggestion for (maybe) this list or others in our DIGGIES 2017 SPORTS and SPORTS BUSINESS “Must Follows” for Twitter and other social media platforms. Please feel free to tweet us up @DigSportsDesk or @terrylyons with your suggestions and opinions. It will help us mold the Year-End “Must Follow” list and will help us shape the DIGGIES 2018 calendar.

**** We’d also appreciate you adding both @DigSportsDesk and @terrylyons to your own list of “Must Follows” for the #SportsBiz world and – if you’re really energetic, vote for Digital Sports Desk on the Boston A-List “Best Sports Blogs in Boston” contest now on-going via WGBH-TV in New England.