HOUSTON – James Harden and the Houston Rockets agreed on a four-year contract extension that is the richest in NBA history.

The contract is a maximum extension that will guarantee Harden $228 million through the 2022-23 season, league sources told ESPN on Saturday. 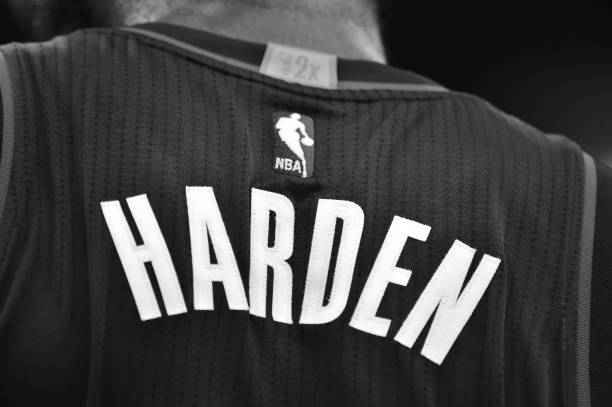 “Houston is home for me,” Harden said in a statement released by the Rockets. “(Team Owner Leslie Alexander) has shown he is fully committed to winning and my teammates and I are going to keep putting in the work to get better and compete for the title.”

Harden, runner-up for the NBA’s Most Valuable Player award last season, has two years and $59 million left on his current contract. The four-year extension carries a value of $169 million.

The Rockets fast-tracked the Harden extension with the arrival of All-Star guard Chris Paul from the Los Angeles Clippers, and reportedly are trying to complete a deal with the New York Knicks for eight-time All-Star forward Carmelo Anthony.

With the mega-deal, Harden is taking advantage of new collective bargaining agreement rules that enable contract extensions for superstars. He became eligible to add four years to his deal after making the All-NBA team in May.

Harden is coming off a career-best season in which he averaged 29.1 points, a league-best 11.2 assists and 8.1 rebounds per game. 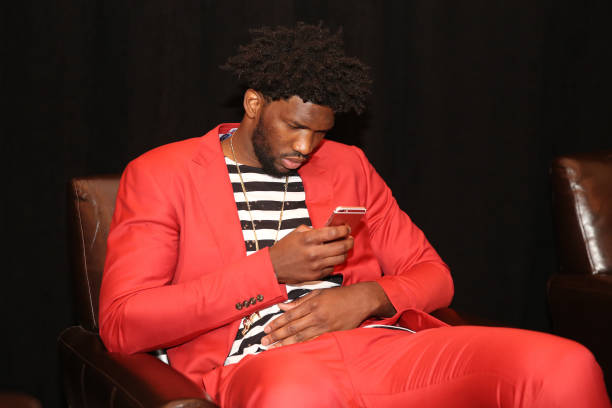 The elder Ball was quick with a response to TMZ Sports.

“He’s got three words. His vocabulary is limited,” Ball said. “You gotta use cuss words when you don’t have no intellect. He’s not intelligent at all. He shouldn’t worry about me, he should be worried about playing.”

Embiid has been quite vocal on social media in regard to LaVar and Lonzo Ball. He answered the elder Ball’s claim that the Lakers would be playoff-bound in 2018 with a tweet asking teammate Ben Simmons to “Please dunk on him so hard that his daddy runs on the court to save him.”

BOSTON – (Staff report from Official News Release) –  The Boston Celtics announced that they have acquired forward Marcus Morris from the Detroit Pistons in exchange for guard Avery Bradley and a 2019 second round draft pick. The Celtics had to part with Bradley for Salary Cap ramifications after agreeing to terms with Utah Jazz free agent swingman Gordon Hayward. Bradley was Boston’s best perimeter defender. 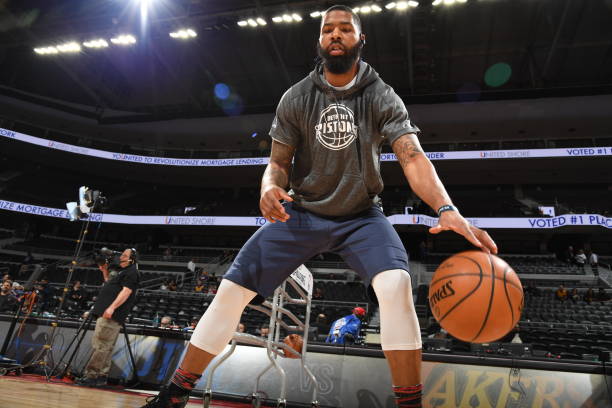 Marcus Morris of the Detroit Pistons warms up before the game against the Los Angeles Lakers on February 8, 2017 at The Palace of Auburn Hills in Auburn Hills, Michigan. Copyright 2017 NBAE (Chris Schwegler/NBAE via Getty Images).

“It’s no secret that Avery had been one of my favorite players, and on behalf of our entire organization, I’d like to thank him and Ashley for all of their contributions on and off the court,” said Celtics president of basketball operations Danny Ainge. “Avery did a lot of the dirty work and often didn’t get the recognition that he deserved, but our coaches, staff, his teammates, and our fans who watched him play every night appreciated what a special player and person he is.

“We are adding a high-quality player with the versatile skillset that Marcus possesses. He will be a great fit for our team,” said Ainge. 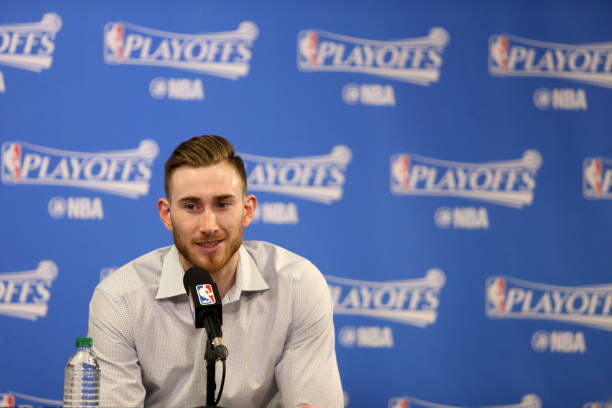 SALT LAKE CITY, UT – MAY 6: Gordon Hayward of the Utah Jazz talks to the media after the game against the Golden State Warriors during Game Three of the Western Conference Semifinals of the 2017 NBA Playoffs on May 6, 2017 at vivint.SmartHome Arena in Salt Lake City, Utah. (Melissa Majchrzak/NBAE via Getty Images).

An afternoon of conflicting reports sent media scrambling for clarification and Steve Bartelstein, the agent for Hayward and a number of  other stars, was forced to go on record after the initial reports, stating, “we have to regroup, here.”

The initial reports proved to be true as Hayward spurned his Utah Jazz team as well as the Miami Heat to commit to the Celtics and Brad Stevens, who coached him at Butler University. The official announcement was not made by the club, as is customary, but instead came as an online “good bye” note from Hayward to the fans of Utah.

Hayward is Boston’s second big-name commitment from the raucous free agent market in as many years. The Celtics signed Al Horford last year.

The Utah Jazz endured a difficult Tuesday with point guard George Hill agreeing to a three-year, $57 million deal with the Sacramento Kings, according to The Vertical. Hill averaged a career-best 16.9 points to go along with 4.2 assists in 49 games last season due to an assortment of injuries.

Hayward met with Miami on Saturday and Boston the following day before a contingent from the Jazz — including the recently acquired Ricky Rubio — met with Hayward at his home in San Diego on Monday. His Boston visit included a meeting with point guard Isaiah Thomas. He was picked up at the airport by Stevens. The 27-year-old Hayward will command a maximum salary after opting out of the final season of his contract.

Hayward averaged a career-best 21.9 points and 5.4 rebounds to go along with 3.5 assists last season for the Jazz, who made their first playoff appearance since 2012

BUFFALO – (Staff and Wire Service Report by The Sports Xchange) – Buffalo Bills wide receiver Sammy Watkins is hoping NFL players can get bigger paydays after watching the first day of NBA free agency with many stars agreeing to megadeals.  The 24-year-old Watkins, the No. 4 overall pick in the NFL draft out of Clemson, took to Twitter on Sunday to push NFL players getting paid like their counterparts in the NBA. 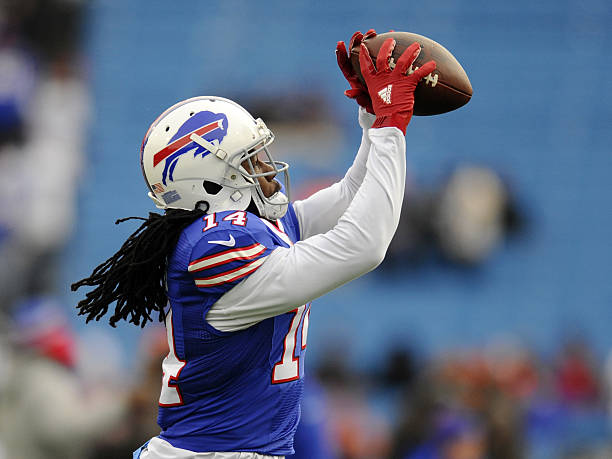 “We gotta get paid more I’m pretty sure 2014 class will change the market,” Watkins tweeted.

Watkins also retweeted NFL player promoter Jake Steinberg, who wrote: “NFL players have the right to be (ticked off). They get the smallest piece of the pie. NFL has $12B in annual revenue; NBA has $5B.”

Watkins has been greatly overshadowed in the 2014 NFL Draft class by fellow wide receivers Odell Beckham Jr. of the New York Giants and Mike Evans of the Tampa Bay Buccaneers, partly because of his multiple injuries.

Watkins caught just 28 passes for 430 yards and two scores in 2016, and then the Bills in May declined to pick up his fifth-year option for 2018 that would have paid their top receiver $13.258 million. Over his four-year rookie contract, Watkins will earn $19.9 million, all of which was fully guaranteed.

The team’s decision means Watkins will be an unrestricted free agent following the 2017 season.

Watkins has experienced injury issues during his first three NFL seasons and played in just eight games last season due to a foot injury.

Head coach Sean McDermott said the Bills are going to continue to “be smart” regarding Watkins as he comes back from his second foot surgery in January.

Watkins resumed practicing during minicamp last month after missing the majority of offseason workouts while recovering from surgery.

Watkins caught 65 passes for 982 yards and six touchdowns in 16 games as a rookie. He set career highs of 1,047 yards and nine touchdowns in his second season when he had 60 receptions in 13 games