NORTON – The PGA Tour’s FedEx Cup Playoffs have been a Dustin and Justin Show also starring Jordan Spieth. Last week in New York, Dustin Johnson took the Northern Trust in a playoff over Spieth. Today, Justin Thomas outlasted a duo of challengers to win the Dell Technology Championship in the suburbs of Boston with Spieth finishing in second-place once again.

Thomas shot (-5) on a gorgeous Labor Day afternoon to finish (-17) to defeat Spieth by three strokes in the second leg of the playoffs, Thomas’ fifth win on tour this year.

The third round of playoffs, with the field cut to the top 70 players rather than the 96 who competed here, continues at the BMW Championship near Chicago in 10 days, after a weekend break to allow for the NFL’s opening weekend television ratings machine to dominate the sports landscape. 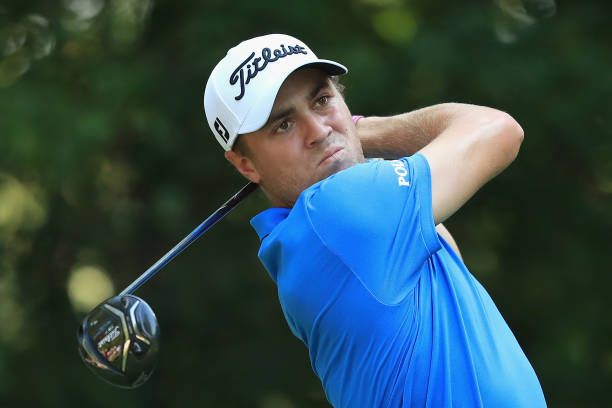 Justin Thomas plays his shot from the ninth tee during the final round of the Dell Technologies Championship at TPC Boston (Andrew Redington/Getty Images).

Spieth bogeyed the 12th, 14th and 18th hole today while Thomas bogeyed only the 11th hole this afternoon and the 5th during his opening round on Friday. Thomas played the newly re-designed and most difficult 12th hole even par all weekend to contribute to his season-long bid to be the PGA Tour Player of the Year. The two will battle it out as the FedEx Cup is down to only two more tournaments, in Chicago and the Tour Championship at East Lake GC in Atlanta.

“We still have two events left,” said Thomas to the assembled New England media crew.  “I mean, I’m probably more excited than anything to get home and see one of my roommates, Tom Lovelady, who just got his PGA TOUR card. He gets home Tuesday night, and we’re going to have a little dinner, celebrate on Wednesday. I’m more excited to see him and just tell him congrats than I am to celebrate my own victory.”

Spieth still holds a slim lead in the complex FedEx Cup Playoff point totals, leading Thomas 5, 071 to 5,044. Johnson (who finished a disappointing T-18th today), Japan’s Hideki Matsuyama and Spain’s Jon Rahm round-out the all-important Top 5 in points. A player in the Top 5 controls his own destiny and can win the $10 million purse with a win at the Tour Championship.

“I’m not going to be as down on myself as I was last week,” said Spieth after his second straight runenr-up finish. “I beat myself up – not beat myself up – but I was upset after last week, really having a good opportunity … it wasn’t the case today. I came out firing like I said we had to, and as we turned from No. 8 through 14 is the meat of the golf course, you want to get through that even. I got through over par and I didn’t get any coming in when I had hit some good putts.”

Spieth missed a putt on No. 17 by inches and settled for par as the green and pin placement played havoc with golfers all afternoon. That miss forced him to attempt a difficult chip on No. 18, and he hit it past the hole and over the sloped green. When Spieth carded the bogey, it allowed Thomas to play No. 18 with a par in mind to secure the three-shot victory, a $1.575 million check for his efforts and some serious incentive and confidence as he prepares for the final two tournaments of the 2016-17 golf season.

“So I just need to go home and get rested next week and get feeling fresh to play these last two events well,” said Thomas, shunning any talk of “world’s No. 1” or best golfer this or best at that, thus proving his wise stature on a tour full of living legends.

“Right now I’m just worried about getting rest. I’m tired. I’m excited to go home and sleep in my own bed. I feel as like I’ve been gone for so long. I guess it’s been 2 1/2 weeks. There was a lot of traveling. I had some media days and kind of took a trip beforehand, and then kind of took another trip in between here. So it was a lot of — a lot of traveling for just 2 1/2 weeks. So that stuff wears on you. So I’m excited to go home and not touch a club for a couple days and hang out with Tom and Bud and enjoy Florida. Hoping this hurricane (noting a Cat. 4 storm brewing in the Caribbean) doesn’t get us.

“I’m going to Chicago a little early and hang out,” said Thomas. “My girlfriend lives there. So — just go there and play some golf courses, and, then, yeah, once that week comes, then I’ll be hopefully ready to go.”